Inside the body's DNA repair shop 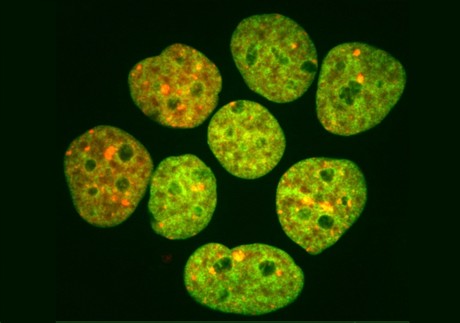 Scientists from New York University (NYU) have identified how damaged DNA molecules are repaired inside the human genome — a discovery that offers new insights into how the body works to ensure its health and how it responds to diseases that stem from impaired DNA. Their work has been published in the Biophysical Journal.

The human genome consists of two metres of DNA molecules packed inside a cell nucleus, measuring 10 µm in diameter. The proper packing of the genome is critical for its healthy biological function such as gene expression, genome duplication and DNA repair. However, both the genome’s structure and function are highly sensitive to DNA damage, which can range from chemical change to the DNA molecule to a full break of DNA’s double helix.

Such harm is not unusual; in fact, the human genome experiences around 1000 DNA damage events every day, which can occur naturally or due to the external factors such as chemicals or UV radiation (eg, sunlight). It is only when it is left unrepaired that DNA damage can have devastating consequences for the cell, as noted by NYU Assistant Professor Alexandra Zidovska and doctoral student Jonah Eaton. For example, an unrepaired DNA double strand break can lead to cell death or cancer — therefore, DNA repair mechanisms are crucial for cellular health and survival.

The scientists examined the formation, behaviour and motion of DNA double strand breaks in the human genome. To do so, they chemically induced DNA breaks inside of live human cells, tracing these breaks using fluorescent markers.

With the help of microscopy and machine learning technologies, the researchers followed the motion of the DNA breaks and genome in both space and time. In their analysis of more than 20,000 DNA breaks in over 600 cells, they found that the genome tends to change the nature of its packing around a DNA break.

“This new packing state for DNA undergoing repair is unlike any packing state found for a healthy DNA,” said Asst Prof Zidovska. “Around a DNA break we find that DNA becomes denser than its surrounding DNA, forming a small island of highly condensed DNA immersed in the sea of uncondensed DNA.”

In addition, the team observed that DNA breaks also move in a unique way — different from that of undamaged parts of genome. The islands of condensed DNA around a DNA break move faster than do healthy DNA, yet the mobility of such islands strongly depends on their size.

“Now we have a better understanding of how a DNA break behaves differently than the undamaged DNA, which allows us not only to gain insight into these repair processes but also inform our efforts in cancer diagnosis and therapy.”