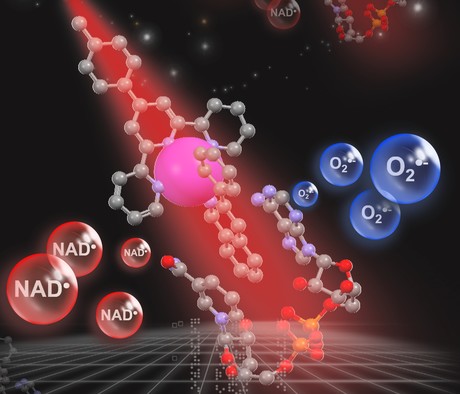 Scientists at the University of Warwick have collaborated with colleagues in China, France, Switzerland and the UK to develop a technique that uses light to activate a cancer-killing compound of iridium that attacks a vital energy source in cancer cells. Described in the journal Nature Chemistry, the technique could lead to another tool for clinicians to use in the fight against cancer.

Photodynamic therapy (PDT) uses light to kill cancer tumours in the body by activating a chemical compound called a photosensitiser, which creates species that can attack cancer cells in the presence of light. Using this method, clinicians can direct the light to specific regions of the cancer tumour and spare normal tissue from damage.

Current treatment methods mainly rely on the presence of oxygen — but many tumours are ‘hypoxic’, which means that they are deficient in normal oxygen often due to poor blood supplies. The international team of scientists have now developed a compound of the metal iridium that will kill cancer cells in culture even when oxygen concentration is low, and could be used to treat any tumours where light can be administered — making it particularly suitable for bladder, lung, oesophageal, brain and skin cancers.

“Now we have a potential new drug which can not only selectively kill cancer cells with normal oxygen supplies, but also hypoxic cancer cells which often resist treatment by photodynamic therapy,” noted Professor Hui Chao from Sun Yat-sen University.

Once light-activated, the iridium compound attacks the energy-producing machinery in cancer cells — a vital co-enzyme called nicotinamide adenine dinucleotide (NADH), which cancer cells require in order to divide and multiple rapidly. The compound catalytically destroys that co-enzyme or changes it into its oxidised form, effectively cutting off the tumour’s power source.

“The compound that we have developed would not be very toxic at all,” said Professor Peter Sadler from the University of Warwick. “We would give it to the cancer cells, allow a little time for it to be taken up, then we would irradiate it with light and activate it in those cells. We would expect killing of those cancer cells to occur very quickly compared with current methods.

The scientists also noted that as the cancer cells die, they change their chemistry in such a way that they will generate an immune reaction in the body, what is known as an immunotherapeutic response. This suggests that the technique may “effectively vaccinate a person against future attack by cancer”, according to Prof Sadler, who said the researchers will investigate this angle in future research.

Image caption: Visible light can activate an iridium (large pink ball) catalyst that has a special coating (grey balls) which homes in on co-enzyme NADH (red/grey/purple balls) in cancer cells and removes an electron from it, so destroying them by cutting off a vital energy source and generating a toxic form of oxygen (in the blue bubble). Image designed by Huaiyi Huang at Sun Yat-Sen University.