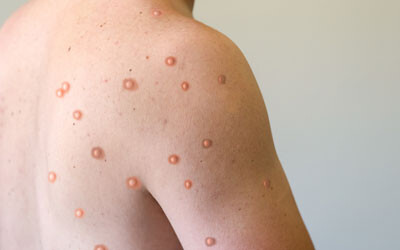 The declaration comes as an international collaboration of clinicians led by Queen Mary University of London has identified new clinical symptoms in people infected with monkeypox in the largest case study series to date, reporting in The New England Journal of Medicine on 528 confirmed infections across 16 countries between 27 April and 24 June 2022.

According to Kelly, the latest data from 1 January to 28 July 2022 as reported by the US Centers for Disease Control and Prevention (US CDC) indicates there have been 20,311 MPX cases in 71 countries (including Australia) that have not historically reported MPX. In Australia, there have been 44 cases — the majority of which have been within returned international travellers.

Kelly said the decision to declare MPX a Communicable Disease Incident of National Significance was made under the Emergency Response Plan for Communicable Disease Incidents of National Significance, in consultation with the Australian Health Protection Principal Committee. He did however acknowledge that MPX is far less harmful than COVID-19; that there have been no deaths reported during the current outbreak outside of countries where the virus is endemic; that MPX is not transmitted in the same way as COVID-19; and that it is far less transmissible than COVID-19.

According to the Queen Mary study, the current spread of MPX disproportionately affects gay, bisexual and other men who have sex with men, with 98% of infected persons from this group. Although sexual closeness is the most likely route of transmission in most of these cases, the researchers stress that the virus can be transmitted by any close physical contact through large respiratory droplets and potentially through clothing and other surfaces, with Kelly noting that infectious skin sores are the most likely mode of transmission.

MPX’s rash and flu-like symptoms are relatively mild, Kelly said, and in most cases resolve themselves within two to four weeks without the need for specific treatments. The rash usually occurs on the face before spreading to other parts of the body, including the palms of the hands and the soles of the feet, and can take on the appearance of pimples, blisters or sores. However, many of the infected individuals reviewed in the Queen Mary study presented with symptoms not recognised in current medical definitions of monkeypox, including single genital lesions and sores on the mouth or anus, which can lead to hospitalisation and misdiagnosis with traditional sexually transmitted infections (STIs).

The study authors concluded that recognising the disease, contact tracing and advising people to isolate will be key components of the public health response. Here in Australia, Kelly said the National Medical Stockpile has available stock of MPX treatments, such as antivirals, for states and territories to access on request. Meanwhile, the Australian Technical Advisory Group on Immunisation (ATAGI) has updated clinical guidance on vaccination against monkeypox to include the use of the MVA-BN smallpox vaccine, to prepare for supplies of the third-generation vaccine to be made available in Australia.