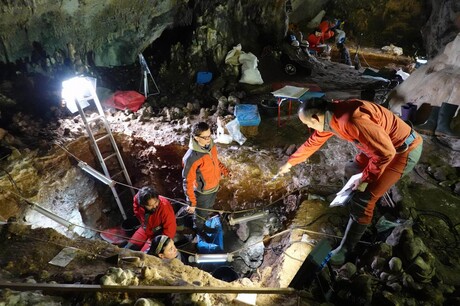 An international research team has reportedly recovered the nuclear DNA of several Neanderthal individuals from the sediment of two Siberian caves and the Galería de las Estatuas, in the Cueva Mayor of the Sierra de Atapuerca (Burgos, Spain).

The research team was led by Matthias Meyer, a senior researcher in the evolutionary genetics group at Germany’s Max Planck Institute for Evolutionary Anthropology. He and his team have previously produced spectacular results at the Sima de los Huesos site, also in the Cueva Mayor, with the recovery of ancient human mitochondrial and nuclear DNA from fossils.

Recently the team decided to explore the possibility of obtaining DNA directly from sediments, avoiding the need to take samples from human bones, which are absent from most sites. It had previously been shown in that it was possible to recover mitochondrial DNA from sediments, but this had not been achieved for nuclear DNA.

Temperature is a primordial factor in the conservation of the DNA molecule: the higher the temperature, the more the molecule degrades. Therefore, the further north the site, the better the conservation will be. Siberia is the ideal place for recovering ancient DNA, but the special characteristics of the Galería de las Estatuas offered a unique opportunity to obtain DNA from sediment in a region situated in more temperate latitudes.

Excavations at the Galería de las Estatuas recovered the remains of animals consumed by Neanderthals and stone tools, in addition to a foot phalanx which is indisputably Neanderthal. Due to their complete isolation, the sediments of this site have remained under constant conditions of humidity and temperature, and have not undergone any alteration by natural agents or interventions by modern humans.

Both nuclear DNA and mitochondrial DNA from several individuals were recovered from the Galería de las Estatuas sediments. The oldest such DNA belongs to a Neanderthal man of an ancient line that has been dated to around 110,000 years old, with a lineage that arose around 130,000 years ago. The date which has been calculated for this ‘radiation’ — namely, the array of lines which emanate from a common ancestor — coincides with the start of the last warm period between two glaciations. The radiation and the improved climate could be linked, because major environmental changes yield major ecological changes, which affect the evolution of many species.

Some thousands of years later, the Neanderthal population of Galería de las Estatuas was genetically different, and associated with a second radiation. Along the stratigraphic sequence, DNA has been identified from at least four women belonging to these newer Neanderthals, who had superseded the old ones. The most modern have been dated to about 80,000 years old, by which time the climate had changed as the last glacial cycle had already commenced.

Published in the journal Science, the team’s discovery is set to open a whole new avenue to future research. As noted by the study authors, “Human fossils will no longer be necessary to identify the inhabitants of a prehistoric cave.”