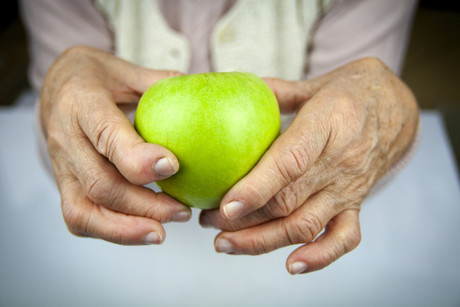 A still-to-be-approved drug containing a selective janus kinase inhibitor has proved itself to be a new option for treating active rheumatoid arthritis (RA).

In a large-scale, international study led by renowned rheumatologist Josef Smolen, it was found that 12.5 to 20% of patients who were given the drug on a daily basis experienced so-called sustained remission — a state that is almost like being cured. The results of the study have been published in The Lancet.

Janus kinases (JAK) play an important role in intracellular signal transmission and are necessary to forward signals from various receptors to the cell nucleus. In rheumatism, however, they are responsible for inflammatory responses. These are curbed by JAK inhibitors.

There are currently two JAK inhibitors (tofacitinib and baricitinib) which are used for treating rheumatoid arthritis, but mostly as combination therapy with the standard therapy methotrexate. In the current study, involving more than 600 patients, the researchers were able to show that a significant improvement can be achieved with the JAK inhibitor upadacitinib as monotherapy.

“With a daily dose of 15 mg, more than one-third of patients achieved low disease activity and, at 30 mg, the proportion was nearly 50%,” said Smolen, from the Medical University of Vienna. “12.5% of the group on the low dose and around 20% on the higher dose achieved so-called sustained remission; that is to say, complete disappearance of disease activity. And that was after only three months.”

This treatment option is so important because RA patients are initially treated with the standard antirheumatic agent methotrexate for six months, and indeed many of them respond very well to this. However, if they do not respond and no remission or at least reduction in disease activity can be achieved, they are given a combined treatment of methotrexate and a biologic agent — frequently anti-TNF, such as adalimumab, administered by injection, which involves risk factors.

By contrast, treatment with JAK inhibitors has already been described by rheumatism experts at MedUni Vienna as being equally effective and does not involve an injection but is given in the form of a daily tablet, making it a simpler form of treatment. Speaking about upadacitinib specifically, Smolen said, “It works extremely quickly — a good response is noticeable after only two to four weeks.”