New understanding of how proteins operate in the body 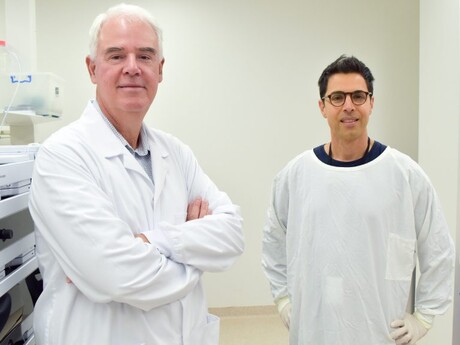 Centenary Institute scientists claim to have made a groundbreaking discovery — one that provides new understanding as to the nature of proteins and how they exist and operate in the human body.

The team’s key finding — the changing state of a protein’s structural bonds — is likely to have significant implications as to how proteins are targeted by medical researchers, particularly in terms of drug development and the fight against disease. It has been published in the journal Nature Communications.

Proteins are responsible for all of life’s processes and had previously been considered to exist in an intact single state when mature. The new study has, however, found two human proteins involved in blood clotting and immunity existing in different and changing states.

“The most sophisticated molecules made in nature are proteins which consist of unique sequences of amino acids,” said Dr Diego Butera from the ACRF Centenary Cancer Research Centre, lead author of the new study. “Disulphide bonds link the amino acid chains together and were thought to just stabilise protein structure.”

Previously it has been believed that these disulphide bonds were fully formed in the mature and functional protein. In this study, the researchers found that the proteins are being produced in multiple disulphide-bonded states.

“We were able to precisely measure whether the disulphide bonds in the blood proteins were formed or broken,” Dr Butera said. “Remarkably, we saw that the proteins were made in multiple, possibly thousands, of different disulphide-bonded states.”

“It’s very likely that we will find many other proteins that exist in multiple states,” Prof Hogg said. “Crucially, a drug may bind more or less preferentially to different states, impacting the effectiveness of the drug.

“In experimental settings, differing states of a protein should now be considered as part of the investigative medical research process.”