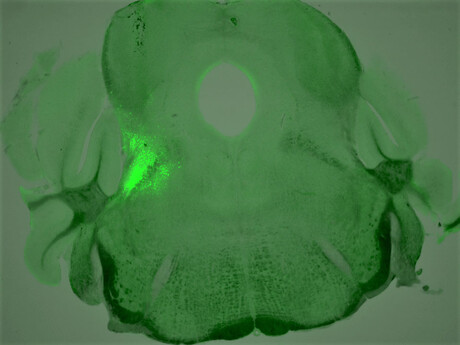 It’s long been known that opioid overdose deaths are caused by disrupted breathing, but the actual mechanism by which these drugs suppress respiration was not understood. US scientists have now identified a group of neurons in the brainstem that plays a key role in this process, showing how triggering specific receptors in these neurons causes opioid-induced respiratory depression (OIRD) — the disrupted breathing that causes overdose deaths. Their results have been published in Proceedings of the National Academy of Sciences.

The US saw more than 93,000 overdose deaths in 2020, of which an estimated 60% were attributed to opioids like fentanyl. Opioids work by binding to proteins on nerve cells (neurons) called opioid receptors and subsequently inhibiting their activity. Currently, naloxone is the only medication known to block the effects of opioids and reverse an overdose. But naloxone has limitations, including a short duration that requires it to be administered multiple times. It also works systemically, blocking opioid receptors throughout the entire body — including those that control pain.

To develop strategies to rescue OIRD with more specificity, Assistant Professor Sung Han and his team at the Salk Institute for Biological Studies set out to search for the breathing neurons in the brain that also carry opioid receptors. The researchers identified a group of neurons that express a certain type of opioid receptor (the mu opioid receptor) and are located in the brainstem breathing modulation centre; they then characterised these neurons’ role in OIRD.

They found that mice that were genetically engineered to lack opioid receptors in these neurons didn’t have their breathing disrupted when exposed to morphine, as mice in the control group did. The researchers also found that, without introducing opioids, stimulating these receptors in control mice caused symptoms of OIRD.

The team then looked at ways to reverse the process by treating the overdosed mice with chemical compounds targeted to other receptors on the same neurons, which play an opposite role as the opioid receptor (activating rather than inhibiting them).

“We discovered four different chemical compounds that successfully activated these neurons and brought back the breathing rate during OIRD,” said first author Shijia Liu, a graduate student in the Han lab. Recovery in overdosed mice was close to 100%, which surprised the team.

Next, the researchers plan to look at whether other cell groups also play a role in OIRD. Further study would also examine the connection between breathing regulation and pain perception in the brain, potentially opening the door to developing more targeted treatments for OIRD.

“We hope to explain the pain-breathing segregation at the molecular or microcircuit level,” Asst Prof Han said. “By doing that, we can try to restore breathing without touching analgesic effects of opioids.”

Image caption: In this image of a mouse brain cross-section, a cluster of neurons that play a critical role in regulating breathing during an opioid overdose is highlighted in bright green. Image credit: Salk Institute.

The striatum was on average 10% larger in psychopathic individuals compared to a control group of...