Unlike human eyes, which have three types of photoreceptors that send signals to the brain for comparison, the eyes of mantis shrimp (Haptosquilla trispinosa) use 12 different photoreceptors to create a pattern that is almost immediately recognised as a colour, without complex brain processing. 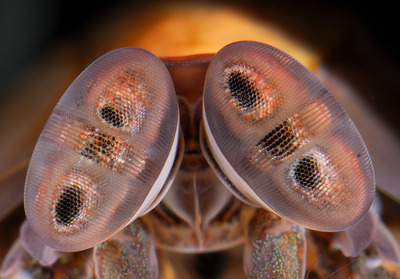 This discovery, by researchers at the Queensland Brain Institute (QBI), has shattered the illusion that more complex eyes with more colour channels generate better colour vision.

It is also the first time since the original descriptions of colour vision in the 1800s that another way of colour processing has been described. And it begs an explanation because only four to seven photoreceptors are believed to be needed to encode the colours on the visible spectrum.

Researcher Ms Hanne Thoen and colleagues found that mantis shrimp with their 12 colour channel processing actually perform worse in differentiating between colours than humans with their three channels.

“Theoretically, mantis shrimp should be far better at distinguishing colours than we are,” Thoen said.

“Human brains - and all other animals including birds, monkeys, frogs and fish - determine the colours of objects by comparing the relative excitation of inputs. For instance, in humans this is red, green and blue,” she said.

“The critical finding is that mantis shrimp do not, and this means their way of encoding colour is different to all other animals known.”

A number of tests were conducted, including training the animals to respond to certain colours and using a two-way choice test with food as a reward.

By receiving food when choosing one particular colour and not any other, the animals quickly learned which choice to make and also revealed how they encode colour.

“We tested their ability to discriminate between colours that differ a lot - such as red and blue, and then changed to colours that got closer and closer together along the spectrum - red-green, red-yellow, red-orange - and noted when they started to make mistakes,” Thoen said.

To account for this, the researchers suggest that mantis shrimp avoid the need for complex neural processing by scanning objects with their 12 photoreceptors - each one set to a different sensitivity.

Unlike human eyes, which have three types of photoreceptors that send signals to the brain for comparison, the eyes of mantis shrimp create a pattern that is almost immediately recognised as a colour, the researchers surmised.

Consequently, mantis shrimp lose some ability to discriminate between colours. For example, the crustaceans might not be able to tell the difference between light orange and dark yellow but they quickly recognise basic colours without comparing wavelengths of the visible spectrum in their brains. This neat trick that might save the mantis shrimp some energy and give it a leg up in the extremely combative and colour-rich coral reef world it inhabits.

The colour discrimination results for the mantis shrimp were compared to a number of other animals including humans, bees, fish and butterflies, which theoretically they should be better than. And they turned out to be far worse.

Professor Justin Marshall, who runs the Sensory Neurobiology Group at QBI, said finding an animal that processes colour vision in a new way is remarkable and totally unexpected.

“It solves a long-standing problem of why mantis shrimp have 12 colour receptors - because they process colours and the contrast they provide in a totally different way to anything we have previously seen in an animal,” Professor Marshall said.

The findings demonstrate how the design of the nervous system has evolved towards a simple arrangement, rather than trying to fully interpret all the information from a very complex colour vision at the retinal level.

“This has the potential to teach us more about humans’ more simplistic perceptions of colour and about bio-inspired machine-vision solutions that might borrow ideas from the evolutionary process,” Professor Marshall said.

“Modern cameras struggle with the amount of data they take in due to increased pixel numbers; maybe there is a more efficient way and the bio-inspiration provided by stomatopods could be the answer.

“In fact, mantis shrimp sample their world in a way more similar to a satellite than other animals,” Professor Marshall concluded.

The research was published in Science.