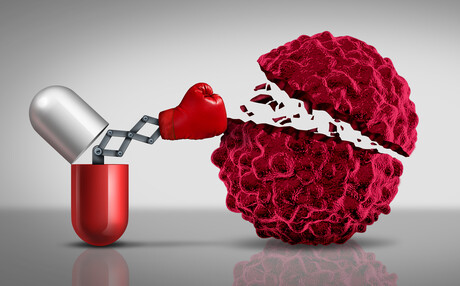 There are often several molecular pathways that stimulate cancer growth, and most targeted therapies affect only one molecular pathway. Drug resistance often develops because of ‘rescue’ from the other cancer pathway not targeted by the drug treatment. The researchers found a solution — to administer an additional drug that controls the second pathway.

The team, led by Professor Lee Soo Chin from CSI Singapore and NUS and Professor Yu Qiang from GIS, focused on a protein called HER2 (human epidermal growth factor receptor 2), which when present in excessive amounts stimulates the cancerous growth of breast cells. Drugs that target HER2 are effective against HER2-overexpressing breast cancer cells, but these drugs eventually become ineffective.

The scientists used existing data from a biochemical database and tumour samples from 29 patients, enrolled in a clinical trial conducted at NCIS, to zero in on an enzyme subunit called PPP2R2B (serine/threonine-protein phosphatase 2A 55 kDa regulatory subunit B beta isoform) that seemed to be in short supply in the cancer cells whenever the drugs targeting HER2 failed to work. The team discovered that PPP2R2B suppresses cancer by making chemical modifications in a signalling pathway called PI3K/AKT/mTOR. When there is a shortage of PPP2R2B, HER2-targeted therapy seems unable to suppress the HER2 protein, and the cancer spreads.

The scientists discovered that another enzyme, EZH2 (enhancer of zeste homologue 2), was responsible for suppressing the activity of PPP2R2B. They found that a clinically available drug called EPZ-6348 is able to block the activity of EZH2, allowing both PPP2R2B and the anti-HER2 drugs to resume their work in suppressing the cancer.

“HER2+ breast cancer comprises 20% to 25% of all breast cancers,” said Prof Lee, who is also Head and Senior Consultant at the Department of Haematology-Oncology at NCIS. “It is highly dependent on HER2 signalling and is traditionally treated with drugs that specifically target HER2.

“Despite initial effectiveness, resistance to anti-HER2 therapy develops almost invariably in patients with advanced cancer, and they will eventually succumb to the disease. This study provides insights on why anti-HER2 drugs eventually fail and offers a solution to restore sensitivity to anti-HER2 treatment, which may prolong the survival of patients.”

Prof Yu added, “The study discovered a new way in which cancer cells develop resistance to anti-HER2 drugs. Given that a third of HER2 and breast cancer cells have low levels of PPP2R2B, we predict that these cancer patients might benefit from adding EZH2 inhibitor to the anti-HER2 treatment.”

With their findings now published in the journal Nature Communications, the research team plans to conduct a clinical trial to test the efficacy of combining a drug that inhibits EZH2 with a standard anti-HER2 drug for treating HER2+ breast cancer. They are also evaluating PPP2R2B as a potential predictive marker to select patients for anti-HER2 therapy.