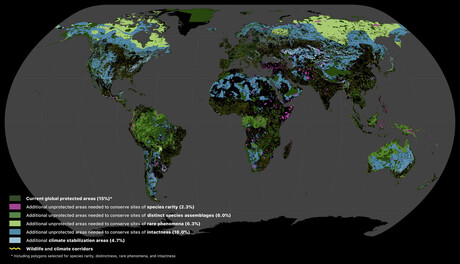 Scientists have produced what they claim to be the first comprehensive global-scale analysis of terrestrial areas essential for biodiversity and climate resilience, totalling 50.4% of the Earth’s land. The team was led by the research organisation RESOLVE in collaboration with the University of Minnesota, Arizona State University (ASU), Globaïa and others with support from One Earth.

The data compiled for the Global Safety Net (GSN) is available through an interactive web application developed by One Earth in partnership with Google Earth Engine, enabling users to click on a country, state or ecoregion to see configurations of biologically important land for each region. An accompanying report, published in the journal Science Advances, meanwhile highlights the importance of protecting and restoring the natural world to address three converging crises — climate change, the loss of biodiversity and the emergence of novel viruses such as COVID-19.

The report finds that an additional 35.3% of land is needed to conserve sites of particular importance for biodiversity and ecosystem services. 50 ecoregions and 20 countries contribute disproportionately to the total. One immediate priority identified is the protection of 2.3% of land area, which provides critical habitat for the world’s most endangered species.

The paper also presents what is described as a “common but differentiated” approach for area-based targets under the United Nations Convention on Biological Diversity, which will be held next year in Kunming, China. Each of the world’s 846 ecoregions has a unique combination of layers, offering recommended area-based conservation targets for each country.

The analysis includes estimates of carbon storage by layer, making the same map relevant for government commitments under the Paris Climate Agreement (UNFCCC). It also highlights the vital role of indigenous lands in protecting biodiversity and reversing climate change, which cover 37% of the Global Safety Net area.

“If we surpass 1.5°C in global average temperature rise, it will be difficult if not impossible to achieve the goals of the UN Convention on Biodiversity,” said Karl Burkart from One Earth. “And if we fail to protect lands for ecosystem services and carbon sequestration, we will not be able to achieve the Paris Climate Agreement. The two conventions are intertwined.

“There is a very finite amount of natural land that could be converted to human uses before we lose the 1.5°C window. Therefore, we need to protect all remaining natural lands by 2030 — approximately 50% of the Earth — in order to save biodiversity and stabilise our global climate system.”

A complementary global-scale connectivity analysis was performed by Globaïa, demonstrating that a relatively modest land area — approximately 350 million hectares — could connect isolated fragments of nature together, increasing the resilience of ecosystems and our biosphere as a whole. As explained by Dr Eric Dinerstein from RESOLVE, the analysis “builds upon the current network of protected areas but weaves in currently unprotected parcels... By connecting these parcels with wildlife corridors, these vital strands create a true safety net — one that can inoculate us from further biodiversity loss and future pandemics by conserving habitats where zoonotic diseases are likely to cross over to human populations.”

“The Global Safety Net is a powerful global roadmap to mitigate climate change and avert the collapse of our natural biological infrastructure,” concluded Dr Greg Asner from ASU. “The GSN is actionable at all scales, from local to national, but it is imperative that national governments act quickly to develop detailed action plans to achieve these goals.”

Image caption: Areas of the terrestrial realm where increased conservation action is needed to protect biodiversity and store carbon. Image courtesy of the study authors under CC BY-NC 4.0. For a larger image, click here.