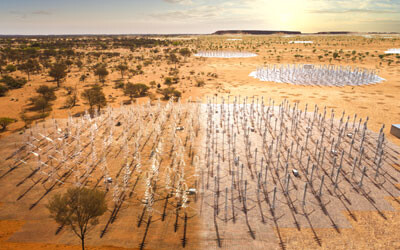 The Australian Government is investing $387 million to co-host the world’s largest radio telescope, the Square Kilometre Array (SKA), putting the country at the cutting edge of science and technology research while creating hundreds of new jobs during the construction phase.

The SKA is an international collaboration between 16 member countries, including Australia, Canada, China, France, Germany, India, Italy, Japan, Korea, the Netherlands, Portugal, South Africa, Spain, Sweden, Switzerland and the United Kingdom. It will be one of the world’s largest science facilities, exploring the entire history and evolution of the universe, and uncovering advances in fundamental physics.

Australia will build and host the low-frequency part of the telescope (SKA-Low), which includes up to 131,072 individual SKA antennas, shaped like Christmas trees. The mid-frequency element (SKA-Mid), comprising 197 dish-shaped antennas, will be hosted in South Africa’s Karoo region.

Prime Minister Scott Morrison said the $387 million investment to build SKA-Low in Western Australia’s Murchison region will help astronomers learn more about our universe, while creating more than 350 jobs during the 10-year construction phase and a further 230 ongoing positions over the 50-year life of the project.

“Our investment in the construction and operations of the SKA will build our manufacturing capacity within the highly skilled technology sector and enable major scientific breakthroughs to be made right here in Western Australia,” the Prime Minister said.

“The SKA will help our scientists make more discoveries than we can imagine today — whether it’s better understanding the origin and future of our stars and galaxies to how gravity works across the universe.”

The $387 million commitment includes $64.4 million to establish a specialist supercomputing centre, to be based in Perth, to process the unprecedented amounts of data that will be generated by the SKA; around 7 Tb of data are set to travel from the SKA-Low antennas to Perth’s supercomputers every second. Minister for Industry, Science and Technology Christian Porter said processing this data onshore will secure opportunities for Australian organisations and scientists to innovate at the cutting edge of computing and modern manufacturing.

“This new investment will build on our $1.5 billion Modern Manufacturing Strategy and be a significant boost to the space sector, which is one of the strategy’s six priority sectors,” Porter said. “It will strengthen our efforts to develop cutting-edge industries with a global reach.

“As well as creating hundreds of local jobs, our economic modelling indicates the project will attract an estimated $1.8 billion in foreign income flows into Australia as a result of the SKA’s first 30 years of operations.

“I am very pleased that the development of the SKA in my home state will also benefit local communities. Our funding includes the provision of fibre-optic connectivity to communities near the SKA, which is at CSIRO’s Murchison Radioastronomy Observatory.

“This high-speed connection will support local economic development while reducing radio interference around the telescope.”

The Australian Square Kilometre Array Regional Centre (AusSRC), a collaboration between WA’s International Centre for Radio Astronomy Research (ICRAR), CSIRO and the Pawsey Supercomputing Centre, is part of an international network of SKA Regional Centres that will support the global flow of data and processing needed for the telescope.

“When the telescope is switched on, it will open the floodgates to a massive amount of data, as signals from all over the universe pour in — it’s an enormous and very exciting challenge for us,” said AusSRC Director Dr Karen Lee-Waddell.

“The flow of data will be roughly 100,000 times faster than your average home broadband speed.

“Each year, we’ll store around 600 petabytes coming from the SKA telescopes for astronomers and astrophysicists from all over the world to access and analyse.

“To put that into perspective, Netflix’s collection of movies is currently around 15,000 titles, and we’ll be storing 10,000 times more data than this every year.”

“This is an astronomical day for science in WA and Australia,” said ICAR Executive Director Professor Peter Quinn.

“After almost 30 years of design, development and preparation, this investment by the Commonwealth Government sends a message to the international community that Australia is fully ready to start building the SKA.

“This project will not only help us better understand the universe we live in, it will also provide STEM careers for the next generation and new technologies that benefit the everyday lives of millions of people around the world.

“All Australians should be proud that this country is going to host the SKA, one of the biggest science projects in human history.”

Image caption: Composite image of the SKA-Low telescope in Western Australia. The image blends a real photo (on the left) of the SKA-Low prototype station AAVS2.0, which is already onsite, with an artist’s impression of the future SKA-Low stations as they will look when constructed. These dipole antennas, which will number in their hundreds of thousands, will survey the radio sky in frequencies as low as 50 MHz. Image credit: ICRAR and SKAO.