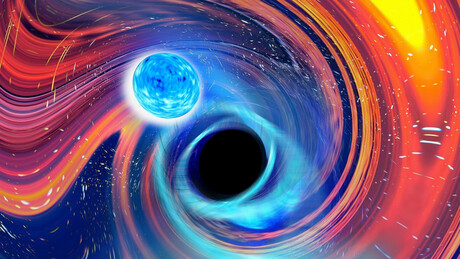 An international team of scientists has for the first time detected black holes swallowing neutron stars — reminiscent of Pac-Man eating dots — in a discovery documenting the collision of the two most extreme and enigmatic objects in the universe. The findings have been published in The Astrophysical Journal Letters.

Black holes and neutron stars are two of the most extreme objects ever observed in the universe — they are born from exploding massive stars at the end of their lives. Typical neutron stars have a mass of one and a half times the mass of the Sun, but all of that mass is contained in an extremely dense star, about the size of a city. One teaspoon of a neutron star weighs as much as all of humanity.

Black holes are even more dense objects than neutron stars: they have a lot of mass, normally at least three times the mass of our Sun, in a tiny amount of space. Black holes also contain an ‘event horizon’ at their surface: a point of no return that not even light can escape.

Neutron stars and black holes orbit around each other at around half the speed of light before they collide and merge, shaking the whole universe and sending out gravitational waves — tiny ripples in the fabric of space and time, like ripples on the surface of a pond. This puts the neutron star under extraordinary strain, causing it to stretch and deform as it nears the black hole.

How much a neutron star can stretch depends on what kind of matter it’s made of. The amount the star stretches can be decoded from the gravitational waves, which in turn tells us about the type of stuff they’re made of. But while pairs of neutron stars and black holes have been predicted to exist by theorists for decades, never before has a neutron star been observed orbiting a black hole.

More than 1000 scientists were involved with the world-first detections, with many from Australia leading the way. The researchers say their observations will help unlock some of the most complex mysteries of the universe, including the building blocks of matter and the workings of space and time.

“It’s an awesome milestone for the nascent field of gravitational-wave astronomy,” said Dr Rory Smith, an astrophysicist at the ARC Centre of Excellence for Gravitational Wave Discovery (OzGrav) at Monash University, who co-led the international team of scientists.

“Neutron stars merging with black holes are amongst the most extreme phenomena in the universe. Observing these collisions opens up new avenues to learn about fundamental physics, as well as how stars are born, live and die.”

“This is a confirmation of a longstanding prediction from binary stellar evolution theory which predicted these systems should exist,” added Dr Simon Stevenson, OzGrav Postdoctoral Researcher at Swinburne University of Technology.

Distinguished Professor Susan Scott, a co-author on the study based at the Australian National University’s (ANU) Centre for Gravitational Astrophysics and OzGrav, said the collisions “have shaken the universe to its core and we’ve detected the ripples they have sent hurtling through the cosmos”.

“Each collision isn’t just the coming together of two massive and dense objects,” she continued. “It’s really like Pac-Man, with a black hole swallowing its companion neutron star whole.

“These are remarkable events and we have waited a very long time to witness them. So it’s incredible to finally capture them.”

Prof Scott said the international team had previously captured many events involving two black holes colliding as well as two neutron stars smashing together, but these were the first confirmed observations of gravitational waves from a black hole and a neutron star colliding. Her colleague Dr Johannes Eichholz, also from the Centre for Gravitational Astrophysics and OzGrav, added that such detections are incredibly rare — so it is remarkable to have observed these events twice within 10 days of each other.

“Like the ripples from these two events, which have been felt a billion years later, these findings will have a profound impact on our understanding of the universe for many years to come,” he said.

OzGrav Postdoctoral Researcher Dr Daniel Brown, from The University of Adelaide, said OzGrav expertise and technology played a crucial role in enhancing the performance of the LIGO detectors to enable the new measurements.

“Researchers and students spent over 1000 days at the LIGO sites during the last observation run installing new hardware and tuning up the performance,” Dr Brown said. “A key contribution was the installation of new hardware to generate what is known as ‘squeezed light’, which is a special quantum state of light that reduces the noise in our measurements. The Heisenberg uncertainty principle suggests there is a limit to how sensitive we can make the detectors, but by using squeezed light we can get around it.”

Sometimes colliding neutron stars and black holes can produce some of the brightest and most powerful explosions in the universe. Astronomers across the globe used telescopes, like the Zadko telescope in Western Australia and the SkyMapper telescope in Central NSW, to scour the night sky for any light flashes associated with these two events — sadly, none were found this time.

“It would’ve been so exciting for SkyMapper to help pin down the visible counterpart to one of these events; unfortunately, it was the clouds that aligned, rather than the stars,” said Dr Christopher Onken, Research Fellow and SkyMapper Operations Manager at ANU. “The next time that a neutron star–black hole merger is discovered with gravitational waves, SkyMapper will hopefully have a clear, dark sky to search for the flash of light. When we eventually find one, it will be a wonderful new way to learn about the physical properties of the densest stars in the universe.”