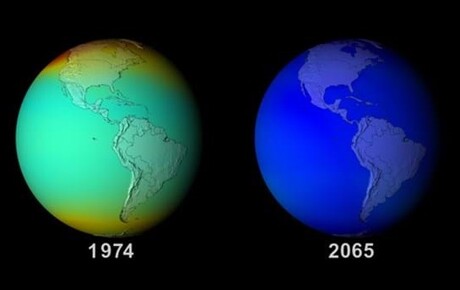 Without the global ban on chlorofluorocarbons (CFCs) we would already be facing the reality of a “scorched Earth”, according to international researchers measuring the impact of the Montreal Protocol on Substances that Deplete the Ozone Layer.

The Montreal Protocol is an international agreement designed to protect the ozone layer by phasing out the production of numerous substances that are responsible for ozone depletion. Introduced in September 1987 and since ratified by all 197 United Nations members, it targets 96 ozone-depleting chemicals in thousands of applications across more than 240 industrial sectors.

New modelling by scientists from the UK, USA and New Zealand, published in the journal Nature, paints a dramatic vision of a scorched planet Earth without the Montreal Protocol, which they call the ‘World Avoided’. Their study draws a stark link between two major environmental concerns: the hole in the ozone layer and global warming.

The research team, led by Lancaster University’s Dr Paul Young, revealed that if ozone-destroying chemicals, which most notoriously include CFCs, had been left unchecked then their continued and increased use would have contributed to global air temperatures rising by an additional 2.5°C by the end of this century.

Their findings show that banning CFCs has protected the climate in two ways: curbing their greenhouse effect and, by protecting the ozone layer, shielding plants from damaging increases in ultraviolet (UV) radiation. Critically, this has protected plants’ ability to soak up and lock in carbon dioxide from the atmosphere and so prevented a further acceleration of climate change.

The research team brought together data on ozone depletion, plant damage by increased UV radiation, the carbon cycle and climate change. Their novel modelling shows an alternative future of a planet where the use of CFCs continued to grow by around 3% a year, with the results as follows:

The depleted ozone layer would have seen the planet, and its vegetation, exposed to far more of the sun’s UV radiation. Studies have shown that large increases in UV radiation can restrict plant growth, damaging their tissues and impairing their ability to undertake photosynthesis, which means the plants absorb less carbon.

Less carbon in vegetation also results in less carbon becoming locked into soils, which is what happens to a lot of plant matter after it dies. All of this would have happened on a global scale.

Therefore, in a world without the Montreal Protocol the amount of carbon absorbed by plants, trees and soils would dramatically plummet over this century. With less carbon in plants and soils, more of it would remain in the atmosphere as CO2.

Overall, by the end of this century without the Montreal Protocol CFC ban:

Ozone-depleting substances, such as CFCs, are also potent greenhouse gases and previous research has shown that their ban prevented their contribution to global warming through their greenhouse effect. By the end of this century, their greenhouse effect alone would have contributed an additional 1.7°C global warming. This is in addition to the newly quantified 0.8°C warming, coming from the extra CO2 that would have resulted from damaged vegetation, meaning that temperatures would have risen 2.5°C overall.

With the planet having already seen 1°C of warming from pre-industrial temperatures, this additional 2.5°C rise would take us to a rise of 3.5°C — far in excess of the 1.5°C rise above pre-industrial levels that many scientists see as the most global temperatures can rise in order to avoid some of the most damaging effects of climate change.

“Our new modelling tools have allowed us to investigate the scorched Earth that could have resulted without the Montreal Protocol’s ban on ozone-depleting substances,” Dr Young said.

“A world where these chemicals increased and continued to strip away at our protective ozone layer would have been catastrophic for human health, but also for vegetation. The increased UV would have massively stunted the ability of plants to soak up carbon from the atmosphere, meaning higher CO2 levels and more global warming.

“With our research, we can see that the Montreal Protocol’s successes extend beyond protecting humanity from increased UV to protecting the ability of plants and trees to absorb CO2. Although we can hope that we never would have reached the catastrophic world as we simulated, it does remind us of the importance of continuing to protect the ozone layer. Entirely conceivable threats to it still exist, such as from unregulated use of CFCs.”