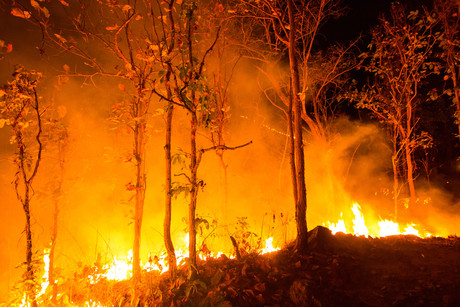 As Australia’s bushfire crisis continues to rage, so too does the debate on whether or not climate change has played any role in this national tragedy. Seeking to answer this question once and for all, scientists from the University of East Anglia (UEA), Met Office Hadley Centre, University of Exeter, Imperial College London and CSIRO Oceans and Atmosphere conducted a Rapid Response Review of 57 peer-reviewed papers published since the IPCC’s Fifth Assessment Report in 2014.

The literature review was carried out using the new ScienceBrief online platform, set up by UEA’s Tyndall Centre for Climate Change Research, which aims to make sense of peer-reviewed publications in a rapid and transparent way. The results? All the studies show links between human-induced climate change and increased frequency or severity of fire weather — periods with a high fire risk due to a combination of high temperatures, low humidity, low rainfall and often high winds — though some note anomalies in a few regions.

The work confirms that rising global temperatures, more frequent heatwaves and associated droughts in some regions increase the likelihood of wildfires by stimulating hot and dry conditions, promoting fire weather, which can be used as an overall measure of the impact of climate change on the risk of fires occurring. Observational data shows that fire weather seasons have lengthened across approximately 25% of the Earth’s vegetated surface, resulting in about a 20% increase in global mean length of the fire weather season.

“Overall, the 57 papers reviewed clearly show human-induced warming has already led to a global increase in the frequency and severity of fire weather, increasing the risks of wildfire,” said Dr Matthew Jones, Senior Research Associate at the Tyndall Centre.

“However, there is also evidence that humans have significant potential to control how this fire risk translates into fire activity, in particular through land management decisions and ignition sources.”

At the global scale, burned area has decreased in recent decades, largely due to clearing of savannahs for agriculture and increased fire suppression. In contrast, burned area has increased in closed-canopy forests, likely in response to the dual pressures of climate change and forest degradation.

Co-author Professor Richard Betts, Head of Climate Impacts Research at the Met Office Hadley Centre and University of Exeter, said: “Fire weather does occur naturally but is becoming more severe and widespread due to climate change. Limiting global warming to well below 2°C would help avoid further increases in the risk of extreme fire weather.”

Professor Colin Prentice, Chair of Biosphere and Climate Impacts and Director of the Leverhulme Centre for Wildfires, Environment and Society, Imperial College London, added: “Wildfires can’t be prevented, and the risks are increasing because of climate change. This makes it urgent to consider ways of reducing the risks to people. Land planning should take the increasing risk in fire weather into account.”

So what’s the best course of action for Australia to take as it recovers and rebuilds from the fires? The country’s science and technology community has already come forth offering to mobilise its expertise, with Science & Technology Australia (STA) President Associate Professor Jeremy Brownlie saying the nation’s scientists stand “ready, willing and able” to help government and local communities in the months ahead.

“Australia needs high-quality scientific expertise at the table as key decisions are taken in the weeks, months, years ahead as we undertake recovery and rebuilding — and establish new systems and policies to mitigate future bushfire threats,” Assoc Prof Brownlie said.

He reiterated his offer at a roundtable of leading science bodies convened by Science Minister Karen Andrews, held on the day the Minister acknowledged that “every second spent discussing if climate change is real is a second we don’t spend addressing these issues”.

“We owe it to communities on the frontline of these terrifying bushfires to make every effort and deploy every piece of expertise and resource to tackle this existential challenge,” Assoc Prof Brownlie said.

“We want to work in close partnership with government to ensure the best evidence and knowledge informs policymaking to combat this threat.”

“We offer this depth and breadth of expertise to help minimise the long-term threat of the fires and to inform action to prevent future devastation from bushfires of this scale and nature.”