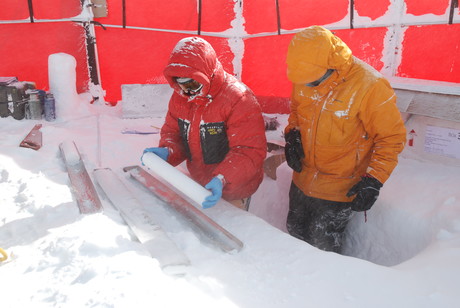 An international team of researchers has found that methane emissions from human fossil sources are at least 25% higher than previously estimated, after examining air that has been trapped in Antarctic and Greenland ice sheets since the industrial period.

Methane has been responsible for more than a quarter of the increased heating of the atmosphere since pre-industrial times (~1750 AD), second only to carbon dioxide in terms of its contribution to global warming. It is associated with gas, oil and coal deposits and this ‘fossil methane’ can be released to the atmosphere during mining operations and gas usage; it is also released naturally from geological seeps and mud volcanoes.

Because fossil methane has been locked up in the Earth for so long, the radioactive isotope of carbon, radiocarbon or carbon-14 (14C), has decayed away. This makes it easy to tell fossil methane sources from biological methane sources such as wetlands, termites, animals and fires, which have a contemporary 14C signature. It is however a more difficult problem to quantify the relative emissions from natural geological sources and human fossil fuel use.

An international consortium of researchers, led by the University of Rochester and including Australia’s own ANSTO and CSIRO, sought to rectify this, using measurements of 14C of methane in samples of air extracted from polar ice sheets to independently quantify the methane emissions from fossil sources. Air from pre-industrial times was extracted from Greenland and Antarctic ice sheets to depths of 138 metres — with a large team in the field required to collect sufficient samples of ice to retrieve the old air.

Typically, a tonne of ice is needed to yield just one methane sample. This takes a team of four people three days to drill, prepare and melt on site to liberate about 100 L of old air. The air was pressurised into special cylinders on-site and transported to University of Rochester for the delicate extraction of gas from the samples. The methane was converted to carbon dioxide and shipped in glass tubes to ANSTO, where the carbon dioxide was finally converted to solid graphite.

Dr Andrew Smith developed the capability that was used to precisely measure the tiny amounts of 14C extracted from the methane in the ice samples. Individual 14C atoms were detected and counted using accelerator mass spectrometry, carried out on ANSTO’s ANTARES accelerator.

“There is no margin for error in making measurements of the samples, so we proceed painstakingly,” Dr Smith said. “The samples are irreplaceable and very expensive to obtain and the measurement runs typically go continuously for 30 hours or more. Everything has to run perfectly.

“ANSTO is one of few laboratories in the world capable of making these challenging measurements.”

Dr Smith said a ‘top down’ approach was used in this study, based on measurements of the concentration and isotopic composition of the methane, used in combination with numerical modelling, to determine source strengths.

“The alternative is a ‘bottom up’ approach in which inventories of coal, oil and gas production are used in conjunction with average emission estimates to establish human fossil source strengths,” he said. “This is the main method used to date and relies on emission figures being correct and the reporting of production being accurate.

“To distinguish human from natural fossil sources we had to go back in time before major fossil fuel exploitation. This allowed us to show that the natural or geological sources were much less than had been calculated. Conversely, this means that the human fossil source is much greater.”

The study’s findings, published in the journal Nature, revealed only minor emissions of natural geologic methane — at most about 10% of previous estimates. Modern emissions from human activity were meanwhile 25–40% higher than previously estimated.

Atmospheric scientist Dr David Etheridge, from CSIRO’s Climate Science Centre, was one of the team who used the ice cores to reveal the changes in methane sources over the past two centuries. He said the latest research answers a long-running question about how natural and fossil fuel sources have contributed to the increase in atmospheric methane since pre-industrial times.

“Being a relatively short-lived gas compared to carbon dioxide, atmospheric concentrations of methane would respond quickly to reduced emissions.”

A large proportion of the elements that are essential to the formation of oceans and life —...