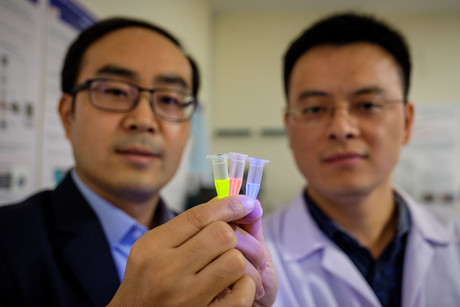 Scientists from Nanyang Technological University, Singapore have developed a type of imaging probe that allows for earlier detection of acute kidney failure — a rapidly developing condition that can be fatal.

Described in the journal Nature Materials and tested in mice, the renal probes are injected into the bloodstream and light up when they detect molecular changes caused by the onset of acute kidney failure. The researchers believe the probes could even be used in test strips for urine samples, resulting in a non-invasive method of detecting acute kidney failure.

Acute kidney failure usually occurs in a few hours or a few days, and is most common among patients who are critically ill and need intensive care. Current diagnostic platforms are unable to detect early-stage, pre-morbid changes that underlie acute renal failure.

“For patients who are critically ill, like those in the intensive care unit, every minute is precious in reversing a condition like acute kidney failure, which can cause a patient’s health to deteriorate rapidly,” said Associate Professor Pu Kanyi, from the NTU School of Chemical and Biomedical Engineering.

“Our molecular renal probes are useful because they follow the body’s subtle changes at the molecular level and could help to arrest the development of the disease before it is too late — something current diagnostic methods are unable to do.”

To make sure the molecular renal probes track the right signals and biological processes, Assoc Prof Pu and his team first identified the reactive oxygen species (ROS) serve as early-stage biomarkers for kidney injury. An imbalance in ROS in the body leads to damage in the body’s fatty tissues, DNA and proteins, which doctors know can trigger pathways for cell death in an organ, and renal fibrosis, in which an injured kidney is no longer able to heal.

“Many reports have shown that ROS-induced by-products are dysregulated in the plasma or urine before acute kidney injury occurs,” Assoc Prof Pu said. “This implies that direct ROS detection could identify acute kidney failure earlier.”

The team then created probes made up of three components: a part that reacts with the identified ROS; a luminescence signalling part that ensures the probe lights up upon this reaction; and a part that ensures that the probe passes through the kidneys instead of accumulating in the liver. These probes are sensitive enough to detect subtle changes in biomarker concentrations, allowing for early detection of the disease.

The probes were injected into mice after they were given cisplatin, a cancer drug, at a level destructive to the kidneys. 12 hours after cisplatin was injected, the probe lit up, signalling the detection of a change in the biomarkers linked to acute kidney injury. This is consistent with the renal tubular damage that was measured in the mice three days after cisplatin was administered.

Aside from testing the probe’s ability to detect signs of acute kidney failure, the NTU team also found that the probe has high renal clearance — more than 97% of the probes injected into mice flowed through the kidneys, and were excreted as part of urine.

The probe’s high renal clearance efficiency means it could be used directly on urine samples, said Assoc Prof Pu. When added to the urine sample and incubated for a few hours, the probes light up when exposed to UV light in the presence of biomarkers. This opens up possibilities of developing these probes as test strips for urine samples, making it a potential non-invasive way of checking for acute kidney failure in the future.

Assoc Prof Pu envisions the use of these probes in an intensive care unit setting, where early detection of acute renal failure is paramount to a patient’s survival.

“In our next phase of research, we need to focus on further refining the probes with urine samples from critically ill patients,” he said. “We plan to do this by collaborating with medical institutions both in Singapore and overseas.”

Image caption: The probes track changes in biological processes at a molecular level.