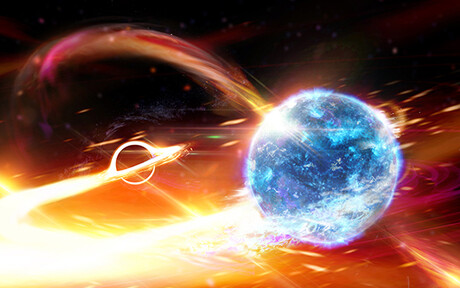 The LIGO and Virgo observatories have announced the detection of gravitational waves caused by the collision of a black hole weighing up to 25 times the mass of the Sun, accompanied by a mysterious astrophysical object weighing around 2.5 times the mass of the Sun. The observation was recorded on 14 August 2019, with the signal coming from a distance of around 800 million light years away.

Understanding what caused the gravitational wave signal (named GW190814) is a classic ‘big data’ challenge for scientists. Dr Rory Smith, an astronomer from the ARC Centre of Excellence for Gravitational Wave Discovery (OzGrav), said figuring out the origin of these gravitational waves required the use of thousands of computers for several months to churn through all the data.

But the discovery turned out to be much more unusual than scientists had ever expected, as the gravitational waves were accompanied by a mysterious astrophysical object — around 2.5 times the mass of the Sun. Researchers have suggested this is likely to be either a dense star, known as a neutron star, or another black hole; however, its mass contradicts this theory — it is heavier than expected for a neutron star and lighter than a black hole.

Black holes and neutron stars are two of the most extreme objects ever observed in the universe — they are born from exploding massive stars at the end of their lives. Typical neutron stars have a mass of one and a half times the mass of the Sun, but all of that mass is contained in an extremely dense star, about the size of a city. If you scooped up a whole mountain from the Earth, it would equate to a mere teaspoon of the total mass of a neutron star.

Black holes are even more extreme objects than neutron stars: they have a lot of mass, normally at least three times the mass of our Sun, in a tiny amount of space. Their gravitational pull is so strong that not even light can escape if it passes too close to a black hole. Calculations reveal the black hole collision happened between 700 million and one billion years ago, but it has taken that long for the gravitational waves to travel to the Earth.

“We may have discovered either the heaviest neutron star or the lightest black hole ever observed,” Dr Smith said. “If it really is a heavy neutron star, then this will radically alter our understanding of nuclear matter in the densest, most extreme environments in the universe.”

The fact that a black hole weighing 25 times the mass of the Sun could collide with either a superheavy neutron star or an ultralight black hole has challenged the accepted understanding of star life-cycles and galaxies. Dr Smith said it is difficult to explain why a star so heavy and dense did not just collapse into a black hole — its very existence hinted that we might need new physics in order to understand it.

“On the other hand, if it turns out to be a black hole, it’s possible we caught a glimpse of a very turbulent, ancient region of the universe where lots of stars were forming and colliding to produce black holes — even then we would have witnessed a very rare spectacle. It’s an exciting and unexpected astronomical discovery all round.” 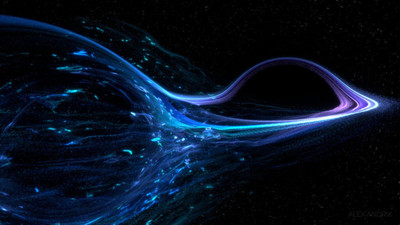 OzGrav PhD student Debatri Chattopadhyay uses simulations to understand how binary systems form, evolve and eventually merge over the course of their lives. She said, “A couple of things make this event unique: mergers of black holes or neutron stars seem to prefer mass companions that are similar in mass, like birds of a feather.

“This event has a black hole that is 10 times more massive than its partner. The less-massive partner also has a mass range about 2.5–2.8 times the mass of the Sun, which falls in the ‘mass gap’ region — the apparent interval between neutron stars and black holes.”

The GW190814 event also poses some questions as to how the strange object formed. The evolution of a binary system — two orbiting stars that are gravitationally bound to each other — describes the history of its formation and life. Gravitational-wave observations of pair mergers provide a window into the past lives of the binary companions.

Binary systems may live in isolation — far away from neighbouring stars — or they may live within dense communities of stars which influence and interact with each other over their lives. However, as Chattopadhyay explained, “The difference in masses between the companions makes it less probable that the system formed in isolation.” So it seems likely that GW190814 formed in a different way.

One theory is that it was formed inside a star cluster, where there is a higher density of stars living together in the same neighbourhood. It’s possible that each object was the result of a chain of collisions between many stars and black holes. This theory could explain the uneven masses in GW190814.

“In these dense environments, like star clusters, stars interact with each other more often,” Chattopadhyay said. “They form and break star pairs throughout their lives. This can create mergers between objects with very different masses.”

Alternatively, one of the companions of GW190814 could have been in several collisions with other objects in the star cluster before this observation. The possibility of an electromagnetic signal accompanying this gravitational wave event was also considered.

Scientists hope to unravel the mystery with more gravitational-wave observations in the future.