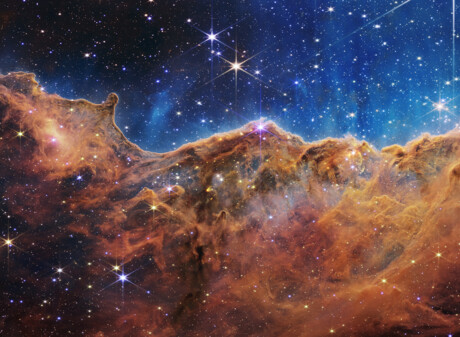 Webb’s first observations were selected by representatives from NASA, the European Space Agency, the Canadian Space Agency and the Space Telescope Science Institute (STScI). They are intended to reveal the capabilities of all four of Webb’s state-of-the-art scientific instruments.

The latest images follow yesterday’s release of the deepest and sharpest infrared image of the distant universe so far. This new image, a colour composite of multiple exposures each about two hours long, covers a patch of sky equivalent in size to a grain of sand held at arm’s length. The deep field uses a lensing galaxy cluster to find some of the most distant galaxies ever detected and only scratches the surface of Webb’s capabilities in studying deep fields and tracing galaxies back to the beginning of cosmic time. 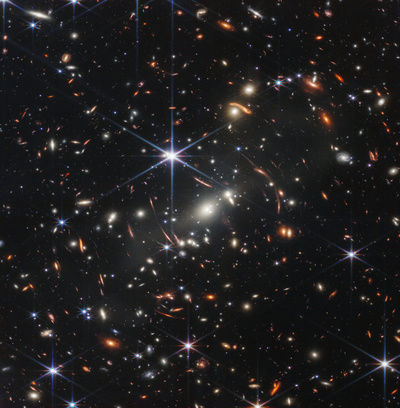 Webb has captured the distinct signature of water, along with evidence for clouds and haze, in the atmosphere surrounding a hot, puffy gas giant planet orbiting a distant Sun-like star. The observation, which reveals the presence of specific gas molecules based on tiny decreases in the brightness of precise colours of light, marks a giant leap forward in the quest to characterise potentially habitable planets beyond Earth. 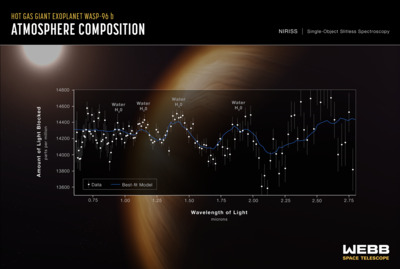 WASP-96b is one of more than 5000 confirmed exoplanets in the Milky Way, representing a type of gas giant that has no direct analog in our solar system. Webb’s Near-Infrared Imager and Slitless Spectrograph (NIRISS) measured light from the WASP-96 system for 6.4 hours as the planet moved across the star: the result is a light curve showing the overall dimming of starlight during the transit, and a transmission spectrum revealing the brightness change of individual wavelengths of infrared light between 0.6 and 2.8 µm.

While the light curve confirms properties of the planet that had already been determined from other observations, the transmission spectrum reveals previously hidden details of the atmosphere: the unambiguous signature of water, indications of haze and evidence of clouds that were thought not to exist based on prior observations. The spectrum of WASP-96b captured by NIRISS covers a remarkably wide range of wavelengths, including visible red light and a portion of the spectrum that has not previously been accessible from other telescopes (wavelengths longer than 1.6 µm). Researchers will be able to use the spectrum to measure the amount of water vapour in the atmosphere, constrain the abundance of various elements like carbon and oxygen, and estimate the temperature of the atmosphere with depth. They can then use this information to make inferences about the overall make-up of the planet, as well as how, when and where it formed.

The Southern Ring Nebula, catalogued as NGC 3132, is an expanding cloud of gas that surrounds a dying star, located approximately 2500 light years away. Webb’s powerful infrared eyes have now brought a second dying star into full view for the first time: from birth to death as a planetary nebula, Webb can explore the expelling shells of dust and gas of the aging stars that may one day become a new star or planet.

The two stars, which are locked in a tight orbit, shape the local landscape. The stars — and their layers of light — are prominent in the image from Webb’s Near-Infrared Camera (NIRCam) on the left, while the image from Webb’s Mid-Infrared Instrument (MIRI) on the right shows for the first time that the second star is surrounded by dust. The brighter star is in an earlier stage of its stellar evolution and will probably eject its own planetary nebula in the future.

The brighter star influences the nebula’s appearance. As the pair continue to orbit one another, they ‘stir the pot’ of gas and dust, causing asymmetrical patterns. Observations taken with NIRCam also reveal extremely fine rays of light around the planetary nebula. Starlight from the central stars streams out where there are holes in the gas and dust — like sunlight through gaps in a cloud.

Webb will allow astronomers to dig into many more specifics about planetary nebulae like this one — clouds of gas and dust expelled by dying stars. Understanding which molecules are present, and where they lie throughout the shells of gas and dust, will help researchers refine their knowledge of these objects. 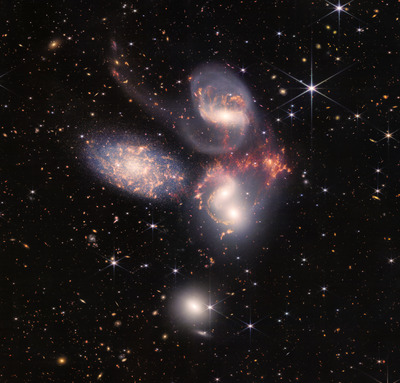 In an enormous new image mosaic, containing over 150 million pixels and constructed from almost 1000 separate image files, Webb reveals never-before-seen details of a compact group of galaxies called ‘Stephan’s Quintet’, located in the constellation Pegasus. Webb’s view of this compact group of galaxies pierced through the shroud of dust surrounding the centre of one galaxy, to reveal the velocity and composition of the gas near its supermassive black hole.

The close proximity of this group gives astronomers a ringside seat to galactic mergers and interactions. Rarely do scientists see in so much detail how interacting galaxies trigger star formation in each other, and how the gas in these galaxies is being disturbed. Stephan’s Quintet is thus a fantastic ‘laboratory’ for studying these processes fundamental to all galaxies. The image also shows outflows driven by a supermassive black hole in one of the group’s galaxies in a level of detail never seen before. 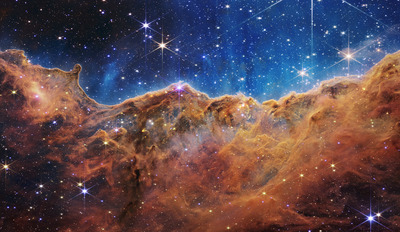 Webb’s look at the so-called ‘Cosmic Cliffs’ in the Carina Nebula unveils the earliest, rapid phases of star formation that were previously hidden. Looking at this star-forming region in the southern constellation Carina, as well as others like it, Webb can see newly forming stars and study the gas and dust that made them.

Webb’s landscape of ‘mountains’ and ‘valleys’ showcases the edge of the giant, gaseous cavity within star-forming region NGC 3324; the tallest ‘peaks’ in the image are about 7 light-years high. The cavernous area has been carved from the nebula by the intense ultraviolet radiation and stellar winds from extremely massive, hot, young stars located in the centre of the bubble, above the area shown in the image.

Webb reveals emerging stellar nurseries and individual stars that are completely hidden in visible-light pictures. Because of Webb’s sensitivity to infrared light, it can peer through cosmic dust to see these objects. Protostellar jets, which emerge clearly in this image, shoot out from some of these young stars. The youngest sources appear as red dots in the dark, dusty region of the cloud. Objects in the earliest, rapid phases of star formation are difficult to capture, but Webb’s extreme sensitivity, spatial resolution and imaging capability can chronicle these elusive events.

Webb’s observations of NGC 3324 will shed light on the process of star formation, addressing questions such as what determines the number of stars that form in a certain region and why stars form with a certain mass. Webb will also reveal the impact of star formation on the evolution of gigantic clouds of gas and dust: while the effect of massive stars — with their violent winds and high energy — is often apparent, less is known about the influence of the more numerous low-mass stars.

The release of Webb’s first images and spectra kicks off the beginning of Webb’s science operations, where astronomers around the world will have their chance to observe anything from objects within our solar system to the early universe using Webb’s four instruments.

“Today is the start of something truly revolutionary in astronomical research,” said Kenneth Sembach, Director at STScI. “The universe will never look the same again — it will appear grander, more dynamic and more detailed than ever before.”