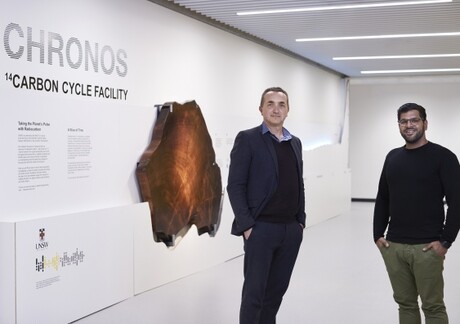 Radiocarbon dating is set to become more accurate after an international team of scientists recalculated the technique for assessing the age of historical events and objects — a project that took a total of seven years.

International radiocarbon calibration (IntCal) curves are fundamental across the scientific spectrum for accurately dating artefacts and making projections about the future. Archaeologists can use that knowledge to correctly restore historic monuments or study the demise of the Neanderthals, while geoscientists rely on the curves to accurately find out about past climate patterns and extremes in order to better understand and prepare for the future.

“Radiocarbon dating has been the workhorse of archaeological and environmental science,” explained UNSW’s Professor Chris Turney.

“We know the world faces many terrible environmental crises, but there still remains uncertainty surrounding the scale and timing of future impacts. A major reason for this is because scientific observations only go back a few hundred years at best. While the past obviously isn’t a perfect analogue for the future, the last 55,000 years provides valuable insights into the carbon cycle, abrupt and extreme shifts in climate, extinction events and human migrations around the planet.

“For example, ice core records show rapid warmings have occurred in the past over the polar regions. So one of the questions that radiocarbon can help answer is how do these changes translate to where people live today? By dating climate records preserved in lakes, peats and the oceans in lower latitudes, we can determine if any one region of the world warms earlier or faster than another, providing insights into the future.”

Prof Turney joined researchers from 41 institutions across 14 countries in developing three curves dependent on where the object to be dated is found. The new curves, published in the journal Radiocarbon, are IntCal20 for the Northern Hemisphere, SHCal20 for the Southern Hemisphere and Marine20 for the world’s oceans.

The curves are created based on collecting a huge number of archives which store past radiocarbon but can also be dated using other methods. Such archives include tree-rings from preserved logs in bogs, stalagmites found in caves, corals from the sea and cores drilled from lake and ocean sediments. In total, the new curves are based on almost 15,000 measurements of radiocarbon taken from objects as old as 55,000 years.

Previous versions of the radiocarbon calibration curve that were periodically compiled over the past 50 years were heavily reliant on measurements taken from blocks of wood containing 10 to 20 years of growth so they were big enough to be tested for radiocarbon. Advances in radiocarbon measurement mean the updated curves instead use tiny samples, such as tree rings covering just single years, providing previously impossible precision and detail in the new calibration curves. Additionally, improvements in understanding of the carbon cycle have meant the curves have now been extended all the way to the limit of the radiocarbon technique, to 55,000 years ago.

Dr Adam Sookdeo, now in Prof Turney’s team, contributed nearly 12% of all the measurements that fed into IntCal during his PhD. He looked at one time span from about 13,000 years ago that saw Northern Hemisphere temperatures plummet.

“My work is focused on reconstructing past climate change — through radiocarbon dating, we can figure out when these alterations happened, how long they lasted, and investigate the roles of the carbon cycle, the geomagnetic field and solar activity.” For example, Dr Sookdeo analysed tree rings from ancient New Zealand kauri trees to trace changes in the carbon cycle in the southern Pacific Ocean.

“These trees are effectively photosynthesising old carbon that’s coming up from the ocean. And so analysing them allows you to actually see changes in the rate at which old carbon dioxide is coming out of the oceans — which leads us to the scary conclusion that it doesn’t take much for the southern Pacific Ocean to go from being a carbon sink to a source,” he said.

Radiocarbon dating is the most frequently used approach for dating the last 55,000 years and underpins archaeological and environmental science. It depends on two isotopes of carbon, called stable 12C and radioactive 14C.

While a plant or animal is alive it takes in new carbon, so has the same ratio of these isotopes as the atmosphere at the time. But once an organism dies it stops taking in new carbon — so the stable 12C remains but the 14C decays at a known rate. By measuring the ratio of 14C to 12C left in an object, we can estimate the date of its death.

“If the level of atmospheric 14C were constant, this would be easy,” Prof Turney said.

“However, it has fluctuated significantly through the past. In order to date organisms precisely scientists need a reliable historical record of its variation to accurately transform 14C measurements into calendar ages. The new IntCal curves provide this link.”

The UNSW contribution to the research was completed at the Chronos 14Carbon-Cycle Facility, which contains the only MIni Carbon Dating System (MICADAS) in the Southern Hemisphere. The facility gave researchers exclusive access to subfossil and living trees from remote New Zealand Subantarctic Islands, ancient bones, peat and lake archives from the Antarctic, and other ancient carbon resources.

“The UNSW Chronos facility enabled us to contribute to this key piece of research that the scientific community will rely on for years to come, and, with new samples spanning periods of global environmental change, will allow us to make a major contribution to the next iteration of this international dataset too,” Prof Turney said.