Voyage to an underwater volcano 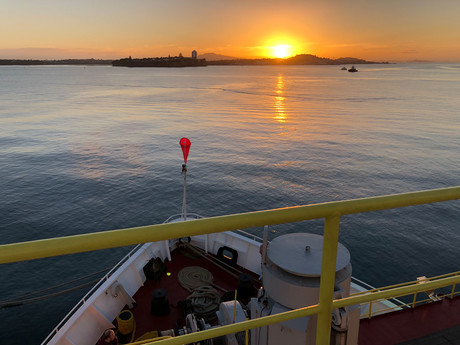 An international team of scientists have returned from a once-in-a-lifetime expedition that took them 400 km north-east of New Zealand. The goal of their two-month voyage? To drill into an active underwater volcano.

One of the 30 scientists on the research vessel JOIDES Resolution was Dr Dominique Tanner, an igneous petrologist from the University of Wollongong’s School of Earth and Environmental Sciences. She applied for Expedition 376 at the beginning of 2017 and was lucky enough to be selected as the Australian representative.

“I wanted to be part of this expedition over any other because I’m really interested in subvolcanic processes that concentrate precious metals beneath volcanoes, and this is one of the rare opportunities we have to look into an environment that’s actively concentrating metals,” Dr Tanner told Lab+Life Scientist. 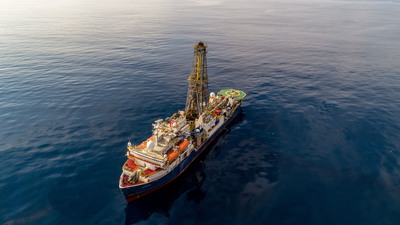 Specifically, Dr Tanner and her colleagues would be studying the Brothers volcano — one of a 1250 km-long chain of seafloor volcanoes known as the Kermadec Arc, above the active subduction zone where the Pacific tectonic plate subducts beneath the Australian plate. Measuring 13 km long and 8 km wide, Brothers is the most hydrothermally active of any of the volcanoes in the region.

“It’s also somewhat unique because it’s what we call a caldera — a big O-shaped volcano, where essentially the top’s been blown off it,” Dr Tanner said. “Because it’s so hydrothermally active, it’s the obvious target for trying to understand the subvolcanic processes controlling fluxes of metals, but also potentially fostering life in these extreme environments.

“I’m personally interested in the minerals and the mineral chemistry from the volcano, but there were many other different scientists on board, and some of them were microbiologists, so they were interested in looking at the limits where we find life in these settings. So there’s a range of different research questions that people are asking about this volcano.” 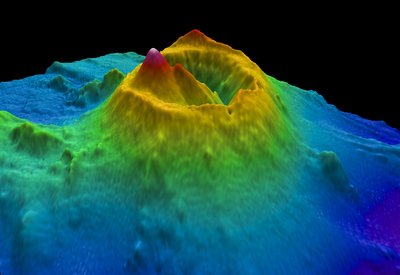 Of course none of these questions could be answered without taking samples from the volcano, and that’s where the JOIDES Resolution comes in. Doubling as a drilling boat, the vessel is renowned for its derrick — an imposing tower that extends over 57 m above the water line. From here, a drill string was lowered into the water, through 1.3 km of ocean, until it reached the surface of the volcano.

“The equipment we’re using is not specifically designed for drilling into hydrothermal systems or loose volcanic rocks,” Dr Tanner said. “But the expedition exceeded all my expectations on how well this equipment would perform once we were at the volcano, and we ended up recovering more core than any other expedition that had drilled into a volcanic hydrothermal setting.” 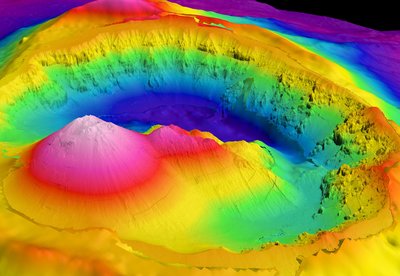 Once the team had drilled holes a couple of hundred metres beneath the surface of the volcano, the resulting material — collected in core barrels measuring 4.5 to 9 m — was recovered for examination in the vessel’s core laboratory, which Dr Tanner described as “state of the art”.

“We had a range of geophysical equipment on board where we looked at things like natural gamma ray radiation and seismic wave velocities; we could quantify the colours of rocks by running different spectrometers along the core; we could measure the magnetic susceptibility of the core; we had a paleomagnetist on board who was analysing the cores as they were collected; and then we also had geochemical labs on board,” she said. “We had a working inductively coupled plasma optical emission spectrometer (ICP-OES) and gas chromatograph, so we could analyse the composition of the material we were drilling, down to the parts-per-million level for some trace elements.”

As a geologist, Dr Tanner spent most of her time in the vessel’s thin section laboratory, where she used a petrological microscope to determine the mineralogy of the samples. She explained, “What we do is we can insert one or two polarising filters into the microscope, and we can look at the way that light passes through different thin slices of rock, as this will split light into different colours — into a full rainbow spectrum. Each mineral has a distinctive colour on that spectrum once the light has passed through a polarising filter, which enables us to identify the minerals present in each sample.” 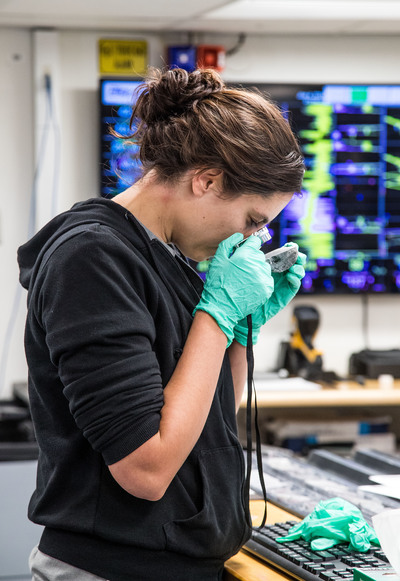 Now back on dry land, Dr Tanner is looking forward to conducting further examination of her samples — particularly looking at the chemistry of quartz and opal, which are common minerals in the Earth’s crust.

“What I’m interested in is studying the trace element chemistry of these really common minerals, because they precipitate from hot fluids beneath the volcano,” she said. “And I want to see if the chemistry changes in different types of volcanic hydrothermal settings. Do the trace elements in silica minerals record a different fluid chemistry if one fluid has a greater magmatic input than another?

“The reason for doing this is so then we can go back to the volcanic deposits and subvolcanic deposits on land — for instance, copper and gold mineral deposits — and we can try and infer more about the fluids that would have formed them, by comparing them as an analogue to this active hydrothermal setting.” 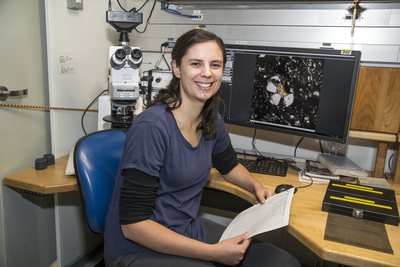 Top image caption: Sunrise over a volcanic island in Auckland before the scientists and crew set sail to the Brothers volcano. Image credit: Dominique Tanner/IODP.