A violin made from spider silk 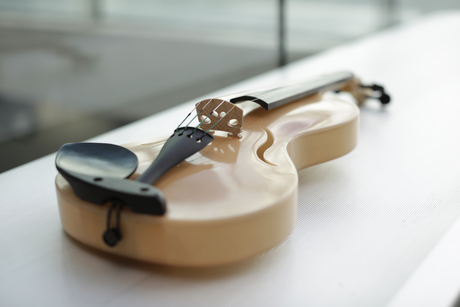 Luca Alessandrini, a postgraduate student from Imperial College London, has developed a prototype violin made from a composite material that includes, among other things, spider silk. He impregnated the violin’s top side with three strands of golden silk spun by an Australian golden orb spider — some of the strongest spider silk in the world.

According to Alessandrini, spider silk has “amazing properties”. Not only is it strong and elastic, but when a creature is caught in a web and struggling to get free the web resonates or vibrates, sending the spider a message. The composite material exploits these resonating properties.

When played, the spider silk vibrates the new violin’s composite casing, which is emitted as sound. In the musical world, this phenomenon is called propagation velocity and is constantly being exploited by instrument makers looking to improve or vary the acoustic properties of instruments.

The composite material also consists of silk and a binding agent. The different fibres, combined with the method of mixing them together, enables Alessandrini to engineer the propagation velocity in his composite material. The advantage of this is that the acoustics of any musical instruments could be customised, depending on the sound that is required. 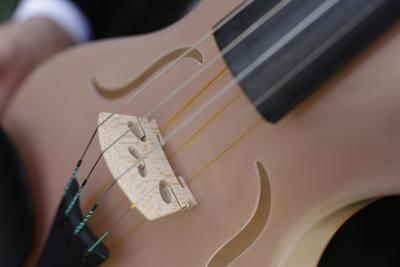 “Spiders’ silk has only previously been exploited as string in bows for instruments, but I’ve discovered that the amazing resonating property of spiders’ silk has massive potential uses in instruments themselves,” said Alessandrini. His approach to making composite material with customisable acoustics could also be applied to the manufacturing of products such as speakers, amplifiers and headphones.

Alessandrini developed his prototype violin in conjunction with the Associazione Nazionale Liutai Artistici Italiani, one of the world’s most influential violin-making associations. He has also showcased the violin to Grammy-nominated violinist Peter Sheppard Skaerved.

“I have been working with great violinists my entire career and I have been in discussions with makers and players about the limited capabilities of other man-made materials such as carbon fibre,” said Sheppard Skaerved. “These have not seemed to offer the organic subtleties of wood.

“My encounter with the prototype instrument developed by Luca has filled me with excitement. This approach offers a tremendous opportunity to move forward instrument making, using new materials in a way I have long hoped.” 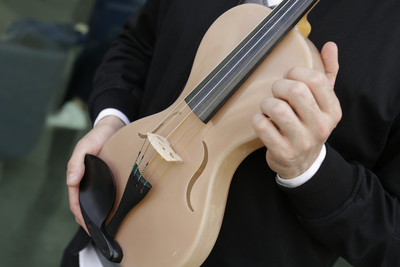 The technology was patented in June 2016. The next steps will see Alessandrini using more sophisticated technologies and modelling processes in the manufacturing process, establishing a start-up business and looking for partners. He predicts the technology will be in the marketplace by approximately 2017.