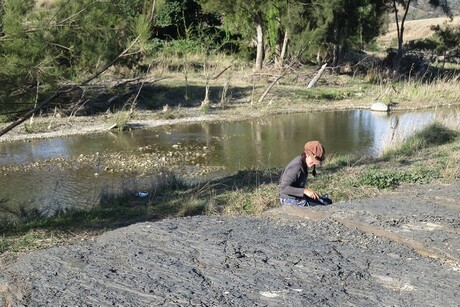 Fresh examination of an Australian fossil, uncovered back in the 1960s, has revealed evidence of a newly discovered plant species that existed more than 359 million years ago.

The fossil has been dated from the end of the Late Devonian period, approximately 372 to 359 million years ago — a time when Australia was part of the super-continent Gondwana. Plants and animals had just started to colonise continents, and the first trees appeared. Yet while diverse fish species were in the oceans, continents had no flowering plants, no mammals and no dinosaurs, and the first plants had just acquired proper leaves and the earliest types of seeds.

The fossil was found by amateur geologist John Irving on the bank of the Manilla River in Barraba, NSW, where it was exposed after major flooding events in 1964. He gave the fossil to the Geological Survey of NSW, where it remained for more than 50 years. Now it is based in France, where Brigitte Meyer-Berthaud, an international expert studying the first plants on Earth, leads a team at the laboratory of Botany and Modelling of Plant Architecture and Vegetation (AMAP).

The French laboratory is particularly interested in further examination of Australian fossils from the Devonian-Carboniferous geological period, to build a more detailed understanding of plant evolution during this era. Antoine Champreux studied the fern-like fossil during his master’s degree internship at AMAP and completed writing his research paper during his current PhD studies at Flinders University.

“It’s nothing much to look at — just a fossilised stick — but it’s far more interesting once we cut it and had a look inside,” Champreux said. “The anatomy is preserved, meaning that we can still observe the walls of million-year-old cells. We compared the plant with other plants from the same period based on its anatomy only, which provided a lot of information.”

A segment and cross-section of the plant fossil.

Champreux found that the plant represented a new species, and even a new genus of plant, sharing some similarities with modern ferns and horsetails. He said, “It is an extraordinary discovery, since such exquisitely preserved fossils from this period are extremely rare. We named the genus Keraphyton (like the horn plant in Greek) and the species Keraphyton mawsoniae in honour of our partner Professor Ruth Mawson, a distinguished Australian palaeontologist who died in 2019.”

An article describing the new plant has been published in the scientific journal PeerJ.