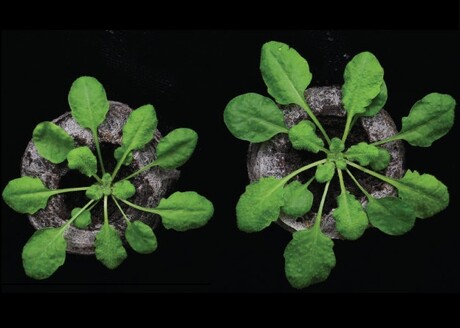 A bacterium living inside the roots of some plants enables them to grow well despite salty conditions. Their secret weapon is to trigger sulfur metabolism — a finding that is helping to develop new biotechnologies that facilitate the irrigation of agricultural crops with salty water.

Some types of beneficial bacteria interact with their plant hosts to help them thrive while also promoting plant growth. In 2013, plant scientist Heribert Hirt founded the Darwin21 project at King Abdullah University of Science and Technology (KAUST), with the aim of using desert plant bacteria to improve agricultural sustainability in arid lands. This led to the isolation of a bacterium called Enterobacter sp. SA187, which they found can make crops resistant to various stresses including heat, drought and salt tolerance.

Hirt’s team has now analysed the genetic and metabolic changes that happen inside SA187 and the model research plant Arabidopsis when they interact under salt-free and salt-stressed conditions. As explained by plant scientist Rewaa Jalal, who obtained her PhD at KAUST, “We wanted to understand the molecular mechanisms behind the salt tolerance that results from plant interactions with SA187.”

Generally, when plants are exposed to too much salt, their cells release reactive oxygen species, causing cell damage and reducing plant growth and crop yields. The researchers found that salt stress triggers sulfur metabolism in SA187 bacteria living inside Arabidopsis roots. This in turn leads to the release of sulfur metabolites that feed sulfur metabolism in the Arabidopsis plant, generating a key antioxidant called glutathione that detoxifies the plant from salt-induced reactive oxygen species, enabling it to grow and thrive despite the stress.

“Another key finding of our investigations was that we can replace the protective function of SA187 against salt stress damage of the plant by directly adding sulfur metabolites, opening up the possibility to use probiotics in agriculture,” Hirt said.

Having published his findings in the journal PNAS, Hirt is now establishing a startup that aims to provide breakthrough technologies that can treat seeds or crop plants with SA187, saving farmers money and making saline agriculture a reality. This is an important prospect for countries that currently depend on energy-intensive desalination for their fresh water.

“We could meet most of the global demand for food production if knowledge like this is applied with the proper tools to arid and semi-arid lands,” concluded KAUST postdoc Hanin Alzubaidy.

Image caption: The research team treated the plant Arabidopsis with a specially selected strain of bacteria to boost their growth in stress conditions. The smaller plant on the left is the control and the plant on the right is the bacteria-treated plant. Image ©2021 KAUST.