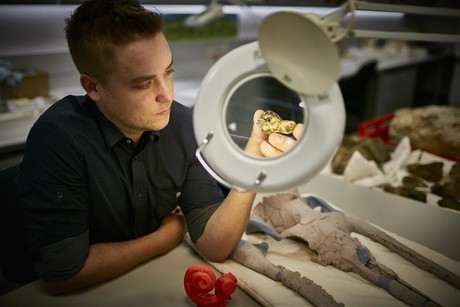 There is still a lot we don’t know about how baleen whales (mysticetes) evolved to be the biological record-breakers they are today, with the ability to grow to lengths of 30 m and to consume up to four tonnes of krill per day. Now, Victorian scientists have discovered the point at which baleen whales acquired the ability to make and hear the lowest frequency sounds of any mammal, which they use to send whale songs across tens and even hundreds of kilometres.

The answer? They’ve always been able to do it.

The scientist made their discovery by detailing the anatomy of the inner ear, or cochlea, of baleen whales living 23–34 million years ago. Using fossil ear bones of early toothed mysticetes from Museums Victoria, the team microCT scanned the bones, before constructing 3D digital models of the cochlea. They were then able to compare these models to those of today’s modern baleen whales and their fossil ancestors (known as basilosaurids).

The researchers found that the cochleae of these three groups are overall very similar, confirming that they’ve been able to hear low-frequency (<20 Hz) sounds since their origin millions of years ago. This is despite the fact that the earliest baleen whales were radically different to those of today, with teeth instead of baleen and measuring only three metres long — roughly the same size as a dolphin.

And while it is unlikely that the earliest baleen whales could hear as low as today’s (down to 12 Hz), the evidence nevertheless suggests that they were low-frequency specialists. Indeed, it shows that baleen whales have never had high-frequency hearing and could not echolocate like dolphins.

“This, at last, reveals that the earliest baleen whales heard low-frequency sound,” said Travis Park, a co-author on the study from Museums Victoria and Monash University. “The similarities of baleen whale cochleae to older whales shows us that this ability evolved well before other extreme adaptations such as baleen, filter feeding and gigantic body size.”

Having published their study in the journal Proceedings of the Royal Society B, the researchers are now studying other aspects of baleen whale hearing that will provide further insights into the creature’s evolution. As noted by Parker, “The hearing of living baleen whales is not much better understood than that of their fossil relatives, so we can expect more surprises as we delve deeper into the history of whales’ most important sense.”