Black holes can be much bigger than previously thought 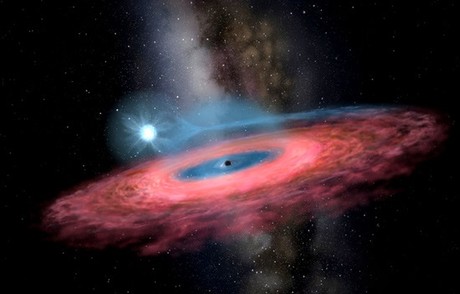 An international team of astronomers, led by Professor Jifeng Liu at the National Astronomical Observatories of China, has discovered that some black holes may be born more than twice the size than previously thought — a breakthrough that has now been published in the journal Nature.

The astronomers surveyed the sky with the LAMOST optical telescope in north-east China to look for stars that orbit around an invisible object, pulled by its gravity. The LAMOST telescope allows astronomers to find binary stars systems, and provides a better understanding of the fates of the most massive stars and the black holes they make.

“This search was by no means an easy task,” Prof Liu said. “Only one star in a thousand may be going round a black hole: it is like trying to find a needle in a haystack.”

The researchers were particularly excited by the discovery of a stellar black hole with a mass 70 times that of the Sun, located 15,000 light years from Earth and named LB-1 by the team. A star eight times bigger than the Sun was seen orbiting around the black hole — one cycle every 79 days.

Study collaborator Professor Alexander Heger, from Australia’s own Monash University, said it was remarkable that this young black hole — at most a few million years old — has been found in our own galaxy, and not in distant galaxies such as those detected by the Laser Interferometer Gravitational-Wave Observatory (LIGO).

“The current view is that the stars in our galaxy cannot easily make a black hole bigger than 45 times the mass of the Sun. But the black hole we have observed is more than 50% larger than this limit.

Prof Liu said the discovery came as a great surprise, stating, “Black holes of such mass should not even exist in our galaxy, according to most of the current models of stellar evolution.

“Now theorists will have to take up the challenge to explain its formation in a solar metallicity environment.”