Cancer cells traced back to their tumour of origin 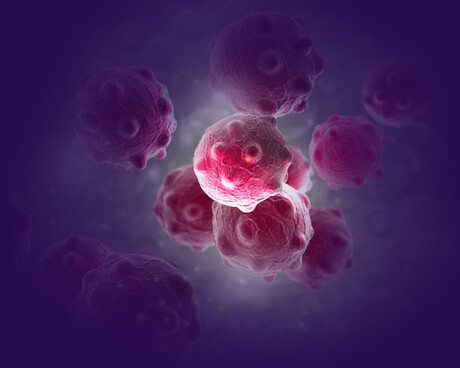 Using a small blood sample from 100 gastric cancer patients, researchers from Osaka City University have successfully identified cancer cells circulating in the bloodstream and traced them back to their tumour of origin by detecting an overexpression of fibroblast growth factor receptor (FGFR2) in both the cancer cells and the tumour.

This new diagnostic method, described in the journal Cancer Science, may allow for real-time detection of the growth patterns of the cancer, leading to quicker and more accurate preventative action — essentially cutting the cancer’s potential metastasizing off at the head.

FGFR2 is a protein that aids in the growth of new cells; for example, it helps repair injuries by aiding in the growth of new tissue cells in the affected area. What FGFR2 does not do, however, is tell cells to stop growing. This means sometimes FGFR2 continues churning out new cells beyond their need, ie, even after the injured area has been repaired, at which point these cells form tumours and turn into cancer.

When the tumour saps all the resources from its surroundings, FGFR2 is activated and new cancer cells are sent down the bloodstream to areas with untapped resources. An overexpression of FGFR2 may mean this protein has been activated to make cells to cancerous levels, with FGFR2 overexpression having a reported 3–10% association with gastric cancers. And since cancer may differ in nature between the primary site and the site of recurrence and metastasis, it is difficult to see where the cancer has spread until its fledgling cells have settled into a new area and grown into an obtrusive tumour.

“If circulating cancer cells in the blood can be detected, it will be possible to investigate the characteristics of cancer metastases that are rarely removed, and it will be a useful diagnostic method for selecting molecular-targeted therapeutic agents suitable for the characteristics of each patient’s unique form of cancer,” said Masakazu Yashiro, lead researcher on the new study.

“The significantly poorer relapse-free survival of patients with these higher correlations suggests that, with this new method of finding FGFR2-positive cancer cells in the bloodstream, scientists can target an existing tumour quicker and with more accurate therapeutic agents,” Yashiro said.

“By successfully identifying FGFR2-expressing cancer cells with a small amount of blood, we expect this tool to contribute to appropriate decision-making on the use of anticancer drugs, such as determining when to start FGFR inhibitors.”

A tumour-like coral disease is prevalent in the reef systems around the Cocos Keeling Islands,...

Doctors may be able to more accurately confirm concussions by measuring mRNA in a person's...

Call out to Queenslanders for OCD clinical trial

Upgrading the pharma industry with automation and real-time information