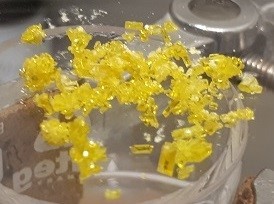 An international team of researchers have found that the abundant base metal chromium can substitute expensive precious metals in photocatalysis — a technique currently used to synthesise pharmaceuticals and fine chemicals. Their work has been published in the journal Angewandte Chemie.

Most photochemical and photophysical applications, such as phosphorescent organic light-emitting diodes, dye-sensitised solar cells and light-driven chemical reactions, use precious metals such as gold, platinum, ruthenium, iridium or rare earth metals. However, precious metals are expensive because they are scarce, while rare earth elements are only mined in a few countries. Furthermore, their extraction often involves considerable consumption of water and energy as well as chemicals. In some cases, such as gold mining, even highly toxic substances such as cyanide or mercury are employed.

On the other hand, resources of chromium are 10,000 times more plentiful in the Earth’s crust than those of platinum and 100,000 times greater than those of iridium, meaning that it is available in sufficient quantities. “Unfortunately,” said Professor Katja Heinze of Johannes Gutenberg University Mainz (JGU), “the photophysical properties of abundant metals like chromium or iron are just not good enough to be useful in these technological applications, especially when it comes to the lifetime of their electronically excited states.”

It is only in the last few years that significant progress in this regard has been made, with Prof Heinze’s team being one of the contributors. They were also involved in the development of so-called molecular rubies — soluble molecular compounds that possess exceptionally good luminescence characteristics, especially excellent photoluminescence quantum yields. Molecular rubies have already been used as molecular thermometers and pressure sensors.

Now Prof Heinze and his group, working with an international team of scientists from Mainz, Berlin, Kaiserslautern, Tübingen and Montreal, have achieved yet another breakthrough. They managed to block all the typical decay channels of a molecular ruby’s electronically excited state so efficiently that the excited state prevailed for an exceptionally long time. The concept extended the excited state lifetime of the synthesised molecular ruby in liquid solution at room temperature to a record level of 4.5 ms.

“Our concept is based on the so-called Laporte’s rule, which was developed by the physicist Otto Laporte, who was born in Mainz in 1902,” stated Steffen Treiling, who carried out the experiments in the Heinze group as part of his Master’s thesis. Put simply, the high molecular symmetry of this specially designed molecular ruby has a positive effect on the lifetime of the excited state.

“When you compare the lifetime of the electronically excited states with those of typical iron compounds, for example, we achieved an increase of around 10–12 orders of magnitude,” added Professor Christian Reber of the University of Montreal.

Despite the long excited state lifetime, the photoluminescence quantum yield of these molecular rubies can reach up to 8.2%. This means they could also be suitable for use in display and sensor technology. Moreover, the research team has also been able to demonstrate that the chromium compound exhibits photocatalytic properties similar to those of precious metal complexes. Consequently, scientists may be able to develop new light-driven reactions using the common metal chromium in the future instead of using the rare, more costly ruthenium and iridium compounds, which today are still the most frequently used.

“Together with our partners at the German Federal Institute for Materials Research and Testing (BAM) in Berlin, TU Kaiserslautern, the University of Tübingen and the University of Montreal, we will continue to push on with our efforts to develop a more sustainable photochemistry,” Prof Heinze said.