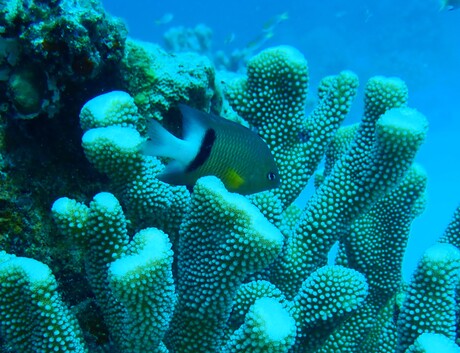 Curtin University researchers have confirmed that a tumour-like coral disease is prevalent in the reef systems around the Cocos Keeling Islands, with the growth anomalies affecting the coral’s ability to reproduce and grow effectively. Their research has been published in the journal Coral Reefs.

Masters student Sophie Preston explained that while marine scientists have known about growth anomalies occurring on corals in coral reef systems for many years, it’s still not known exactly why they occur.

“Coral reef tumours have been located across major reef systems in the Indo-specific and wider-Atlantic regions, affecting the dominant reef building corals,” Preston said. “What makes this outbreak unique is the pristine reef in which it occurred, and that it is the first report of growth anomalies on Isopora palifera globally.

“Our research found that one-third of the local Isopora palifera population was affected by these pale tumour-like growths, with the disease present at around 75% of sites surveyed.

“These tumours are essentially rapid skeletal growths on the main colony structures. While the growths may not be affecting the coral, physiologically speaking, they are requiring the coral to expend a lot of energy to grow this deformed skeleton — energy that would normally be used for reproductive activities.

To carry out their research, the team collected samples from the Cocos Keeling Islands lagoon area, located about 2100 km from Exmouth, Western Australia. Through X-ray fluorescence analysis, they studied the chemical composition of the coral, from both infected and non-infected skeletons, as well as recording the changes in biological and reproductive components using histology.

Research co-author Dr Zoe Richards explained they found a significant difference between the healthy and non-healthy tissues, with the findings adding another layer of complexity to the search for the cause of the problem.

“What we do know is that the division of energy away from reproductive and autotrophic activities, instead towards rapid skeletal growth, is to the detriment of the biological and reproductive functioning of the coral,” Dr Richards said.

“The infected tissues had a reduction in the density of polyps, mesenterial filaments and zooxanthellae, and almost a complete absence of eggs.

“The question of why and how this is happening still remains. Could fish be carriers of the disease and transporting it between corals? Could human-generated waste be leaching into nearby water systems, resulting in the coral anomalies? Is it transmitted like a disease, or are environmental factors at play?

“Understanding the dynamics of this disease will allow us to better protect and manage the pristine coral reefs at the Cocos Keeling Islands, and across Western Australia.”