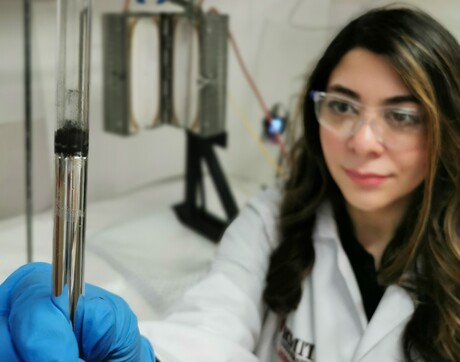 Researchers from RMIT University have developed a smart and efficient new way of capturing carbon dioxide and converting it to solid carbon, to help advance the decarbonisation of heavy industries. Described in the journal Energy & Environmental Science, the method is designed to be smoothly integrated into existing industrial processes.

Decarbonisation is an immense technical challenge for heavy industries like cement and steel, which are not only energy-intensive but also directly emit CO2 as part of the production process. Technologies for carbon capture and storage (CCS) have largely focused on compressing the gas into a liquid and injecting it underground, but this comes with significant engineering challenges and environmental concerns. CCS has also drawn criticism for being too expensive and energy-intensive for widespread use.

The new method offers a more sustainable approach, instantly converting carbon dioxide as it is produced and locking it permanently in a solid state. This prevents CO2 emissions while also delivering value-added reutilisation of carbon.

“Turning CO2 into a solid avoids potential issues of leakage and locks it away securely and indefinitely,” said Associate Professor Torben Daeneke, co-lead researcher on the study.

“And because our process does not use very high temperatures, it would be feasible to power the reaction with renewable energy.”

The RMIT team employed thermal chemistry methods widely used by industry in their development of the new CCS tech. The so-called ‘bubble column’ method starts with liquid metal being heated to about 100–120°C; carbon dioxide is injected into the liquid metal, with the gas bubbles rising up just like bubbles in a champagne glass. As the bubbles move through the liquid metal, the gas molecule splits up to form flakes of solid carbon, with the reaction taking just a split second.

“It’s the extraordinary speed of the chemical reaction we have achieved that makes our technology commercially viable, where so many alternative approaches have struggled,” said co-lead researcher Dr Ken Chiang.

Assoc Prof Daeneke said the work built on an earlier experimental approach that used liquid metals as a catalyst. He said, “Our new method still harnesses the power of liquid metals but the design has been modified for smoother integration into standard industrial processes.

“As well as being simpler to scale up, the new tech is radically more efficient and can break down CO2 to carbon in an instant.”

A provisional patent application has been filed for the technology, and researchers have recently signed a $2.6 million agreement with environmental technology company ABR, which is commercialising technologies to decarbonise the cement and steel manufacturing industries. ABR Project Director David Ngo said the RMIT process turns a waste product into a core ingredient in the next generation of cement blends.

The next stage in the research is scaling up the proof of concept to a modularised prototype the size of a shipping container, in collaboration with ABR. The team is also investigating potential applications for the converted carbon, including in construction materials, and is keen to hear from other companies to understand the challenges in difficult-to-decarbonise industries.

“Ideally the carbon we make could be turned into a value-added product, contributing to the circular economy and enabling the CCS technology to pay for itself over time,” Assoc Prof Daeneke said.