Driven to drink: how climate change is changing koala behaviour 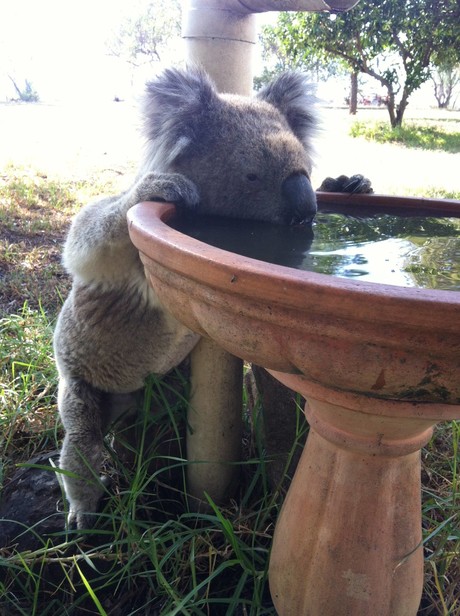 It has long been understood that koalas rarely drink water, instead receiving all their required hydration from eucalyptus leaves. In fact, the name ‘koala’ actually comes from an Aboriginal word meaning ‘no drink’.

But now, researchers at the University of Sydney have made a remarkable and somewhat concerning discovery: Australia’s koalas are getting thirsty, and it’s likely a result of climate change.

Previous studies have found that gum leaves can dry out, with koalas rejecting the foliage when leaves have a water content of less than 55–65%. The animals are thus being forced to seek new sources of water, leaving the safety of their treetop homes in order to do so.

Led by Dr Valentina Mella, the University of Sydney scientists set up a long-term surveillance study in the regional town of Gunnedah, NSW, which experienced an increase in its koala population just over a decade ago after several tree-planting campaigns. They were assisted by local farmer Robert Frend, who designed a series of artificial water stations (known as ‘Blinky Drinkers’) from which the koalas could drink if they so wished.

The marsupials were found to be very thirsty, drinking from the water stations during the day (when they would normally be asleep), as well as at night, for sessions that lasted more than 10 minutes on average. The results are especially concerning as the study was conducted during autumn and winter, causing Dr Mella to pose the question: “What will happen when temperatures rise in summer to make the leaves even drier and the koalas require more relief?”

Dr Mella noted that koalas are “particularly vulnerable to climate change because they rely exclusively on trees — not only to sleep on but also for eating, which together comprise the bulk of their activities”. With increasing hot and dry conditions set to pose a threat to the creatures’ habitat, the researchers hope to use their findings to create a practical plan to help conserve this iconic species.