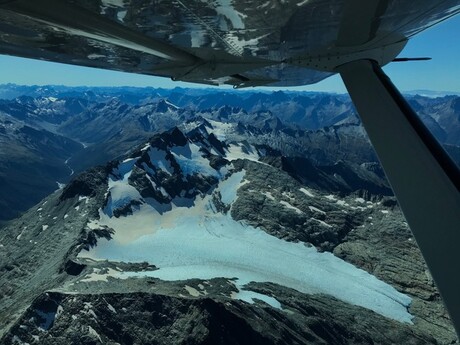 Australian and New Zealand scientists have shown a strong link between human greenhouse gas emissions and the increased melting of glaciers. Led by Dr Lauren Vargo from Victoria University of Wellington’s Antarctic Research Centre, and published in the journal Nature Climate Change, the study is only the second ever to directly and formally link glacier melt to climate change.

The study began in response to observations made during the 2018 End of Summer Snowline Survey, which Dr Vargo and other researchers collaborate on in March every year. The survey records the snowline position on New Zealand’s glaciers and ice geometry (thickness and flow) changes using aerial photos, which then allows researchers to determine the level of growth or shrinkage of key glaciers.

In 2018, the survey team observed the least amount of snow on the glaciers since the survey began. They wanted to determine to what extent this lack of snow was due to human influence.

“For example, the extreme loss of mass we saw of one glacier — the Rolleston Glacier — in 2011 would be a one-in-100-year event under natural conditions, but due to climate change this has become a one-in-eight-year event.

“These increases in likelihood are due to temperatures that are 1°C above pre-industrial levels, confirming a connection between greenhouse gas emissions and high annual ice loss.”

Dr Vargo and her colleagues will now apply this method to studying more glaciers. She said, “There are over 100 glaciers globally that have annual measurements of mass change available, so we can use these with our new method to calculate the human fingerprint on glacier melt around the world.

“We know that many glaciers globally experienced their highest levels of melt in the last decade, so we look forward to investigating the link between this melt and human climate influence. Ultimately, we hope this research can contribute to evidence-based decision-making on climate change.”

Image caption: The Brewster Glacier in New Zealand, photographed during the 2020 End of Summer Snowline Survey. The glacier has been stripped of nearly all snow, leaving only bare, blue-coloured ice. Such glaciers are not sustainable in a warming climate. Image credit: Dr Lauren Vargo.