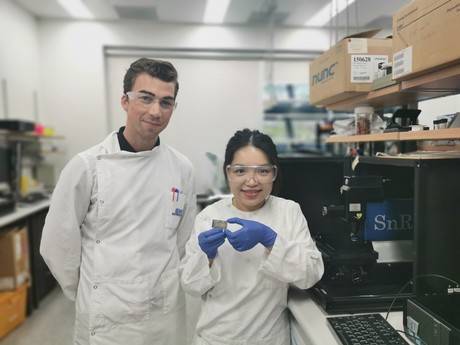 A novel blood test that uses gold nanoparticles to detect cancer has also been shown to identify signals released by cancer cells, which could result in earlier diagnosis and better treatment.

As revealed in the journal Science Advances, the nanotechnology developed by University of Queensland (UQ) scientists can detect and monitor extracellular vesicles (EVs) in the bloodstream. Australian Institute for Bioengineering and Nanotechnology (AIBN) researcher Jing Wang said the discovery could lead to more effective, personalised cancer therapy by allowing oncologists to rapidly determine how treatment is progressing.

“EVs are an exciting next generation of potential biomarkers in blood,” Wang said. “They are nanoparticles that are constantly emitted by health cells and cancer cells to enable cell-to-cell communication.

“They are like tiny bubbles that transport cargoes such as DNA, proteins and other molecules between cells, and this cargo reveals a lot about what’s going on inside the cell. Cancer cells use the EV nanoparticles in order to manipulate the cells around them, as well as to suppress and manipulate the immune system.”

AIBN researcher Dr Alain Wuethrich said cancer EVs have been difficult to distinguish from EVs emitted from healthy cells, which are more abundant in the bloodstream. He explained, “We used an electrically activated nanofluidic chip that helps capture only cancer-emitted EVs. We coupled this with a special type of gold nanoparticle attached to antibodies that stick to molecules found only on the surface of cancer EVs.”

The gold nanoparticles emit a unique signal when hit with laser light and this can be used to detect an EV fingerprint specific to the patient.

With the help of the collaborators at the Olivia Newton-John Cancer Research Institute (ONJCRI), the technology was tested on blood samples from 23 melanoma patients. The device accurately detected cancer-derived EVs in the blood samples and could also track how the cancer EV fingerprint changed in response to therapy for each patient.

“Our technology can reveal changes in the cancer EV fingerprint, so it could be used to quickly find out whether a therapy is working or if drug resistance is happening,” Wang said. “This could guide cancer therapy in real time.”

The AIBN team lead has previously demonstrated that gold nanoparticles can be used to detect circulating tumour cells (CTCs) and unique fragments of DNA released by cancer cells. The detection of EVs with the help of these nanoparticles adds a critical new weapon to the cancer-detection arsenal.

“This technology could complement and eventually replace more costly cancer imaging technologies, and could potentially become regularly used at point of care in a doctor’s surgery,” Wang said.

Speeding up the development of pulse seeds

Researchers have created a new technique that speeds up the development of seeds, producing...

A container-scale facility seeks to convert CO2 contained in ambient air into highly...

Getting junk out of space

Research to tackle the growing need to find, capture and remove junk from space is advancing at...