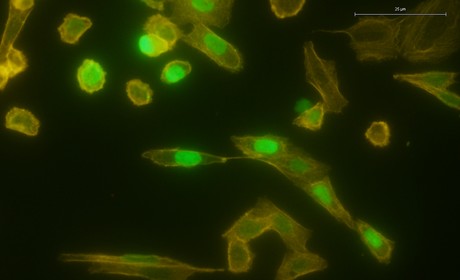 The tool enables researchers to comb through billions of peptides and find very rare peptides capable of effectively delivering advanced biologics like protein- and DNA-based drugs into cells.

Phylogica founder and head of Telethon Kids’ Drug Discovery Unit Adjunct Professor Paul Watt said the discovery was the culmination of more than a decade of research at the institute aimed at developing new ways to survey vast genetic libraries and identify the right peptides to support particular therapeutic applications.

“Our team has found a way to find very rare peptides that can deliver smart drugs, or biologics, inside cells in a more effective way than conventional approaches,” Professor Watt said. “It’s like using a super-powerful magnet to find a ‘needle in the haystack’ from billions of potential candidates.

“In many cases these diseases are caused by ‘targets’ that are currently regarded as ‘undruggable’, or inaccessible to conventional therapeutics.”

Professor Watt described how billions of peptides from Phylogica’s unique library were screened to find those that had the ability to carry drug cargos, helping them to penetrate the cell and escape its ‘endosomes’ — compartments that quarantine foreign bodies which cross the cell membrane.

Those rare peptides in the library with the required characteristics were tagged when they reached their destination so that they could be captured in the screen. The process yielded 13 next-generation cell-penetrating peptides (CPPs) capable of delivering their cargos into cells and out of endosomes.

Phylogica is currently testing multiple other candidate peptides arising from this powerful new screen. “By finding these unique peptides that can not only deliver the biologics drugs inside the cell but also escape the endosome ‘quarantine’, we’ve uncovered a way for biologics drugs to work much more efficiently inside the cell,” Professor Watt said.

“However, the challenge is that they are very difficult to efficiently get inside cells where they can be most effective.”

The Phylogica researchers found the unique CPP peptides identified by the screening tool were very versatile and could effectively deliver a range of drugs into multiple cell types. They also found peptides that could target the Myc protein, a master regulator switch for cancer cell growth, and tested the technology on various breast cancers, NUT midline carcinoma, and a variety of blood cancers.

The second study, published earlier this month in the journal Oncogene with collaborators from the Harry Perkins Institute of Medical Research, described the impact of Phylogica’s next-generation CPPs in the treatment of cancer. The article highlights a novel therapeutic approach to target highly aggressive and chemo-resistant MYC-activated cancers.

“We can take such existing DNA-based drugs that are showing promising results and make them even better by delivering them more efficiently into the cells and out of the endosome where they’d otherwise be trapped,” Professor Watt said.

He said the technology had the potential to hit many more disease targets than currently available drugs.

“Phylogica has already been working with major pharma companies globally allowing them to incorporate this technology into their drug discovery programs,” he said.

The two papers, ‘A platform for discovery of functional cell-penetrating peptides for efficient multi-cargo intercellular delivery’ and ‘Tumor penetrating peptides inhibiting MYC as a potent targeted therapeutic strategy for triple-negative breast cancers’, can be downloaded here.