Newly discovered star pulsates on just one side 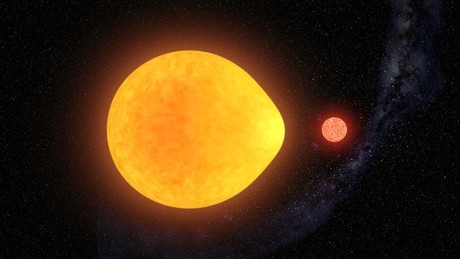 A star that pulsates on just one side has been discovered in the Milky Way, about 1500 light years from Earth — and while such stars have been predicted in theory, this is the first of its kind to be recorded.

Rhythmic pulsations of the stellar surface occur in young and in old stars and can have long or short periods, a wide range of strengths and different causes. There is, however, one thing that all these stars had in common: the oscillations were always visible on all sides of the star.

Now an international team, including researchers from the University of Sydney, has discovered a star that oscillates largely over one hemisphere. The unusual behaviour of the star was initially observed by citizen scientists poring over public data from NASA’s TESS satellite, which is hunting for planets around distant stars.

“What first caught my attention was the fact it was a chemically peculiar star,” said study co-author Dr Simon Murphy, from the Sydney Institute for Astronomy at the University of Sydney. “Stars like this are usually fairly rich with metals — but this is metal poor, making it a rare type of hot star.”

Dr Murphy shared the find with international collaborators to discover others had started to study the star, known as HD 74423, which is about 1.7 times the mass of the Sun. Together, they published their findings in the journal Nature Astronomy.

“We’ve known theoretically that stars like this should exist since the 1980s,” said study co-author Professor Don Kurtz, from the University of Central Lancashire. “I’ve been looking for a star like this for nearly 40 years and now we have finally found one.”

The scientists eventually identified the cause of the unusual single-sided pulsation: the star is located in a binary star system with a red dwarf. The orbital period of the binary system, at less than two days, is so short that the larger star is being distorted into a teardrop shape by the gravitational pull of its close companion.

“The exquisite data from the TESS satellite meant that we could observe variations in brightness due to the gravitational distortion of the star as well as the pulsations,” said lead author Professor Gerald Handler, from the Nicolaus Copernicus Astronomical Center.

To their surprise the team observed that the strength of the pulsations depended on the aspect angle under which the star was observed, and the corresponding orientation of the star within the binary. This means the pulsation strength varies with the same period as that of the binary.

“As the binary stars orbit each other we see different parts of the pulsating star,” said study co-author Dr David Jones, from the Instituto de Astrofisica de Canarias (IAC). “Sometimes we see the side that points towards the companion star, and sometimes we see the outer face.”

This is how the astronomers could be certain that the pulsations were only found on one side of the star, with the tiny fluctuations in brightness always appearing in their observations when the same hemisphere of the star was pointed towards the telescope.

While this is the first such star to be found where only one side is pulsating, the authors expect to find many more similar systems as the technology to listen inside the beating hearts of stars improves. Study co-author Professor Saul Rappaport, from the Massachusetts Institute of Technology, said, “We expect to find many more hidden in the TESS data.”

Speeding up the development of pulse seeds

Researchers have created a new technique that speeds up the development of seeds, producing...

A container-scale facility seeks to convert CO2 contained in ambient air into highly...

Getting junk out of space

Research to tackle the growing need to find, capture and remove junk from space is advancing at...