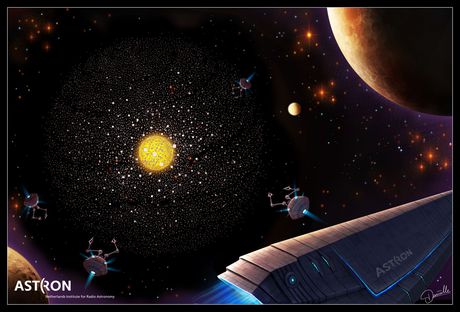 Professor Michael Garrett has used radio observations of candidate galaxies to show that advanced civilisations are very rare or entirely absent from the local universe. The results of his research have been published in the journal Astronomy & Astrophysics.

Advanced civilisations harnessing energies on galactic scales (so-called Kardashev Type III civilisations) are expected to be detectable in the mid-infrared part of the spectrum via the emission of significant waste heat products. A team of astronomers led by Dr Jason Wright (Penn State University, USA) has already drawn up a list of several hundred candidate galaxies where unusually extreme mid-IR emission is observed.

Professor Garrett, from ASTRON (the Netherlands Institute for Radio Astronomy) and the University of Leiden, has used radio measurements of the best candidate galaxies and discovered that the vast majority of these systems present emission that is best explained by natural astrophysical processes. In particular, the galaxies follow a well-known global relation that holds for almost all galaxies — the so-called ‘mid-infrared radio correlation’. The presence of radio emission at the levels expected from the correlation suggests that the mid-IR emission is not heat from alien factories but more likely emission from dust — for example, dust generated and heated by regions of massive star formation.

“It’s a bit worrying that Type III civilisations don’t seem to exist. It’s not what we would predict from the physical laws that explain so well the rest of the physical universe … Perhaps advanced civilisations are so energy efficient that they produce very low waste heat emission products — our current understanding of physics makes that a difficult thing to do.”

Professor Garrett is still looking at a few candidate galaxies that lie off of the astrophysical correlation, especially since his technique can be used to help identify less advanced (Kardashev Type II) alien civilisations that command more limited resources on sub-galactic scales. Such civilisations are still considerably more advanced than our own (Earth is not yet on the Kardashev Type I scale), but they might be more common as a result.

“What’s important is to keep on searching for the signatures of extraterrestrial intelligence until we fully understand just what is going on,” he said.

Image caption: The figure (courtesy Danielle Futselaar, copyright ASTRON) shows what the activities of a Kardashev Type III civilisation might look like — encapsulating the energy of stars by so-called Dyson spheres or swarms is one way to harness enormous energies on truly galactic scales. The resulting waste heat products, which such a galactic-scale enterprise would produce, should be detectable by today’s telescopes.