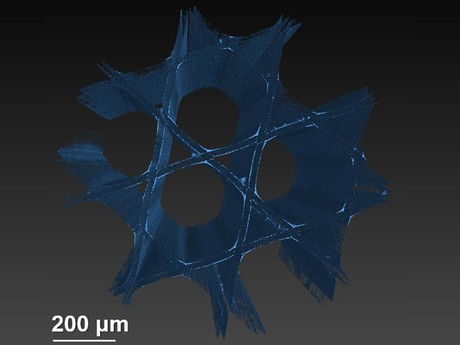 Chemists, physicists and engineers at the University of Southampton have transformed optical fibres into photocatalytic microreactors that convert water into hydrogen fuel using solar energy. Their work has been described in the journal ACS Photonics.

The team’s groundbreaking technology coats the inside of microstructured optical fibre canes (MOFCs) with a photocatalyst which, using light, generates hydrogen that could power a wide range of sustainable applications. The MOFCs have been developed as high-pressure microfluidic reactors by each housing multiple capillaries that pass a chemical reaction along the length of the cane.

“Being able to combine light-activated chemical processes with the excellent light propagation properties of optical fibres has huge potential,” said lead author Dr Matthew Potter. “In this work, our unique photoreactor shows significant improvements in activity compared to existing systems. This as an ideal example of chemical engineering for a 21st-century green technology.”

Advances in optical fibre technology have played a major role in telecommunications, data storage and networking potential in recent years. The latest research saw experts from Southampton’s Optoelectronics Research Centre (ORC), part of the Zepler Institute for Photonics and Nanoelectronics, tap into the fibres’ unprecedented control of light propagation.

The scientists coated the fibres with titanium oxide, decorated with palladium nanoparticles. This approach allows the coated canes to simultaneously serve as both host and catalyst for the continuous indirect water splitting, with methanol as a sacrificial reagent.

“Optical fibres form the physical layer of the remarkable 4 billion km-long global telecommunications network, currently bifurcating and expanding at a rate of over Mach 20, ie, over 14,000 ft/s,” said study co-author Dr Pier Sazio. “For this project, we repurposed this extraordinary manufacturing capability, using facilities here at the ORC, to fabricate highly scalable microreactors made from pure silica glass with ideal optical transparency properties for solar photocatalysis.”

The multidisciplinary team will now establish wider studies that demonstrate the scalability of the platform. They are also investigating photochemical conversion of carbon dioxide into synthetic fuel, which would present a potentially feasible solution for renewable energy, the elimination of greenhouse gases and sustainable chemical production.

Study co-author Professor Robert Raja concluded, “Over the past 15 years, we have pioneered the development of a predictive platform for the design of multifunctional nanocatalysts and we are excited this partnership with the ORC will lead to multiscale developments in photonics and catalysis.”

Slow warming of the deep ocean not good news

The world's deep oceans are warming at a slower rate than the surface, but it's still not...

The method has been found to detect kidney cancers with high accuracy, including small, localised...