Pluto's atmosphere predicted to freeze over 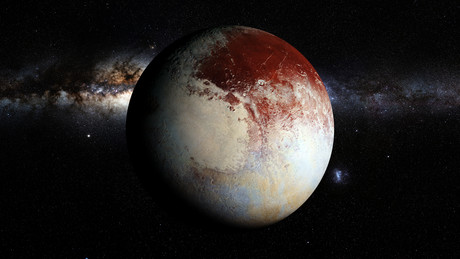 Pluto’s atmosphere is predicted to ultimately collapse and freeze over, according to almost three decades’ worth of research from an international team of scientists.

Pluto is the smallest, coldest and most distant dwarf planet with an atmosphere in the Solar System. It orbits the Sun every 248 years and its surface temperature is between -228 and -238°C. Its atmosphere consists of nitrogen, with traces of methane and carbon monoxide.

Astronomers from the University of Tasmania (UTAS) have been researching Pluto’s atmosphere since the 1980s, with Associate Professor Andrew Cole saying, “Our ambition has always been to gain a better understanding of the atmosphere’s evolution.” Observations from the 1.3 m Harlingten telescope at UTAS’s Greenhill Observatory have now helped the scientists construct seasonal models of Pluto and how it responds to changes with the amount of sunlight it receives as it orbits the Sun.

“What the study found was when Pluto is farthest away from the Sun, and during its winter in the Northern Hemisphere, nitrogen freezes out of the atmosphere,” Dr Cole said.

“The atmospheric pressure has tripled over the past three decades, but as the planet orbits, our modelling showed that most of the atmosphere would condense out to almost nothing left.

“What our predictions show is that by 2030 the atmosphere is going to frost out and vanish around the whole planet.”

The international study aimed to record the seasonal evolution of Pluto’s surface pressure by observing ground-based stellar occultations to gain the atmosphere’s profile including density, pressure and temperature.

A ground-based stellar occultation occurs when a planet passes in front of a background star, allowing astronomers to measure the absorption of starlight by the planet’s atmosphere. They can only do this if they are lucky enough to position their telescopes along the path traced out by the planet’s shadow, which passes over a given spot on the Earth’s surface for just a minute or two.

“If it does freeze over, Pluto may appear brighter in the sky due to sunlight reflecting,” Dr Cole said.

The study’s results were also used in comparison with NASA’s New Horizons mission, which gathered data during a flyby study of Pluto in 2015. According to Dr Cole, “The striking red terrain seen in the New Horizons images could fade away if they are snowed under with nitrogen frost.”

Dr Cole said the research “has been crucial in furthering our understanding of Pluto and testing what we know about atmospheres, ices and climate at extreme conditions”. It has been published in the journal Astronomy & Astrophysics.