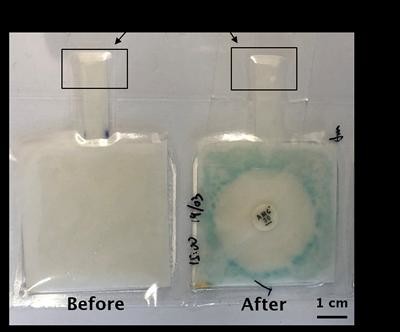 A newly developed infection test, made up of sheets of paper patterned by lasers, will enable diagnosis at the point of care (POC) — helping doctors give patients the right treatment, and quickly.

Laboratory tests to identify the cause of common infections like urinary tract infections (UTIs) can take up to four days, with doctors having to use broad-action antibiotics as a first line of treatment. Not only may this be less effective than using drugs specific to the infection, it also contributes to an increase in antibiotic-resistant bacteria.

Now new research, led by Dr Collin Sones from the University of Southampton and published in the journal Biosensors and Bioelectronics, shows a paper-based device made using lasers could allow doctors to find out which antibiotic, if any, they should prescribe. Using similar methods to existing pregnancy tests and urine dipsticks, the easy-to-use technology has the potential to be cheap to produce and could be done by a doctor or nurse on the ward, slashing diagnosis times.

Made using lasers, the test paper has three layers — a top layer containing four common antibiotics in confined rectangular areas, an absorbent paper in the middle and an agar gel-containing base layer, all sealed in a plastic casing. The liquid sample (eg, urine) is added to a small paper tab, which is then covered with tape to prevent drying out or contamination.

The sample spreads across the middle paper layer, coming into contact with the four rectangles containing the test antibiotics (amoxicillin, ciprofloxacin, gentamicin and nitrofurantoin). If bacteria are present the paper will turn blue, and if the infection can be treated with one of the antibiotics there will be a clear patch around the corresponding rectangle.

The test thus gives doctors an early identification of bacterial infection, and also indicates which one of the four common antibiotics will work best — or if it is a strain untreatable with any of them. When compared against standard lab tests done in petri dishes with agar gel, the team got comparable results using artificial urine spiked with the bacteria E.coli.

“By enabling doctors to quickly determine if an infection is caused by bacteria, and if the bacteria are resistant to four common antibiotics, this device could cut down on unnecessary antibiotic prescriptions and help fight the growing threat of antibiotic resistance,” Dr Sones said.

Image shows the results of a device test with E. coli bacteria.