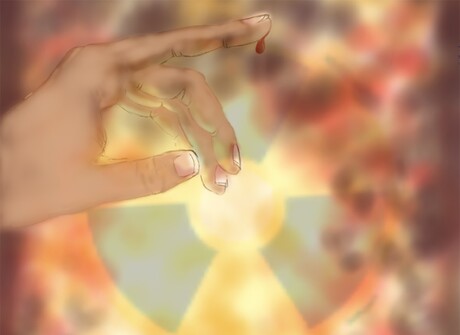 US scientists have developed a new testing method that has the potential to rapidly identify radiation sickness based on biomarkers measured through a single drop of blood. Described in the journal Scientific Translational Medicine, the method could help save lives through early and real-time identification of the condition to enable timely clinical interventions.

Radiation sickness, or acute radiation syndrome (ARS), is a condition caused by irradiation of a major volume or the entire body by a high dose of penetrating radiation in a very short time period — usually a matter of minutes. The condition can rapidly weaken a person through its side effects, most often impacting the bone marrow and gastrointestinal systems early while the debilitating effects on pulmonary, cardiovascular and central nervous systems can be delayed. Death can occur in a matter of days for the most severe cases, but most patients die within several months of exposure.

“This new test uses a single drop of blood — collected from a simple finger prick — and results are ready in a few hours,” said Associate Professor Naduparambil K Jacob, from the OSUCCC – James Translational Therapeutics Program. “It is rapid, scalable and can serve as a point-of-care-type diagnostic tool for real-time evaluation to screen a large number of individuals in a short time.”

As part of the test, the Ohio researchers compare the relative expression of two small molecules called microRNAs in the blood. The first is microRNA-150, which Assoc Prof Jacob’s lab identified several years ago as a biomarker to measure the extent of bone marrow damage. This microRNA decreases as a function of radiation dose while the normaliser, called microRNA-23a, does not change. Comparing these two molecular measures allowed the scientists to quantify the actual radiation dose absorbed and therefore the overall exposure risk.

“We measure ionising radiation in grays,” Assoc Prof Jacob said. “People who are exposed to two gray need to be identified and treated and it is predicted that if you are exposed to about four gray to the whole body, without timely treatment there is a 50% chance of survival.”

He noted that the tool would have critical relevance in responding to a mass casualty disaster scenario like that of Chernobyl to identify at-risk military personnel and civilians who need immediate treatment. It also has relevance for cancer patients, especially bone marrow transplant patients and others who have intense radiation therapy, where overdosing as well as underdosing is of concern.

“Some patients develop major issues like thrombocytopenia and neutropenia as the result of radiation treatment,” Assoc Prof Jacob said. “We can’t look at a patient and determine how much radiation he or she has absorbed, but the impact can be cumulative. As a result, radiation sickness could occur weeks or months after the radiation therapy.