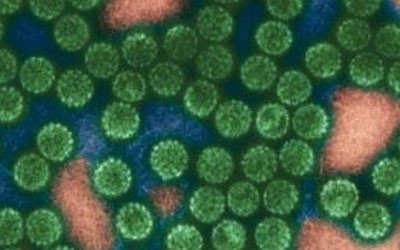 French scientists have developed a ‘two-for-one’ diagnostic approach for women with human papillomavirus (HPV), not only detecting the type of HPV infection but also indicating precancerous markers. Published in The Journal of Molecular Diagnostics, the test should improve the ability to diagnose the riskiest forms of HPV infection, provide rapid results at low cost and help avoid unnecessary diagnostic procedures.

Around 99% of cervical cancers are caused by HPV — but the existence of more than 200 HPVs, some of which are associated with varying degrees of cancer risk, complicate diagnosis and treatment. Currently, cervical cancer screening either focuses on testing for HPV or identifying abnormal cervical cells with cytology; however, molecular diagnostic tests that detect the DNA or RNA of viruses are poor at identifying cancer or precancerous lesions. Analysis of cervical cells with the Pap test, even when combined with molecular detection of high-risk HPV, results in a significant number of unnecessary colposcopies — an invasive test by which the physician visually checks for cervical lesions.

Now, lead investigator Professor Marc Eloit of the Institut Pasteur and his team have developed HPV RNA-Seq — a novel in vitro molecular diagnostics procedure for the detection of high-risk HPV infection and the identification of patients with high-grade squamous intraepithelial lesions (HSIL), which is a precancerous stage of the cervix. Combining the advantages of molecular assays (HPV typing) and cervical cytology (cell phenotyping), the test is based on the dual combination of multiplexed reverse transcription PCR (RT-PCR) and next-generation sequencing (NGS).

RT-PCR is a sensitive way to measure small amounts of RNA, the genetic material that reflects the activity of the HPV genes, while NGS makes it possible to finely characterise the diversity of the amplified viral sequences. This enables detection of up to 16 high-risk or putative high-risk HPVs in a sample as well as the presence of precancerous markers.

In a proof-of-concept study, HPV RNA-Seq was used to analyse samples from 55 patients — 28 with low-grade squamous intraepithelial lesions (LSIL) and 27 patients with precancerous HSIL. HPV RNA-Seq was able to detect and determine the type of HPV infection among a panel of 16 high-risk HPVs, with results comparable to a widely used and officially approved HPV DNA molecular diagnostic kit. In fact, HPV RNA-Seq detected two more HPV-positive patients than the DNA test and also identified more patients with multiple HPV infections.

The test was found to have sensitivity (ability to detect the presence of an HPV) of 97.3% and negative predictive value (NPV, likelihood of not having HPV) of 93.8%. As noted by Prof Eliot, “Effective cervical cancer screening requires high sensitivity and NPV for high-risk HPV infection, since women with a negative HPV test are usually tested again only after several years.”

Cytology is used as a rapid method to triage patients with HPV, whereas histology is considered the gold standard for cervical cancer diagnosis. Histological analysis, however, is more invasive and requires more time to yield results. To determine if the new test has a place in cervical cancer triage, the investigators also compared cytology to HPV RNA-Seq and found markers of high-grade cytology, with encouraging diagnostic performances of HPV-RNA-Seq as a triage test. They also found the positive predictive value (PPV, likelihood of having HPV infection) of HPV RNA-Seq vs histology was always greater than the PPV of cytology vs histology, constituting “a solid argument in favour of a potential added medical value of HPV RNA-Seq compared with cytology”, according to Prof Eloit.