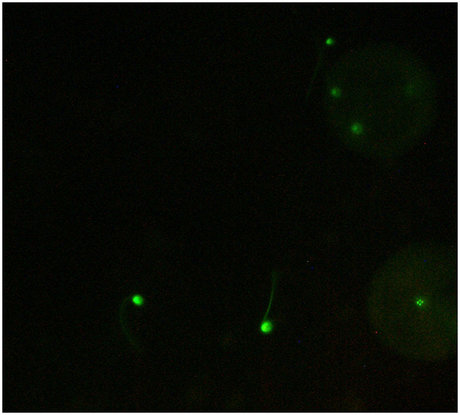 Scientists from The University of Western Australia have used fluorescent green dye to observe different sperm competing to fertilise eggs. Their study, published in the journal Scientific Reports, will help break through the uncertainties surrounding how sperm from different males interact when competing for fertilisations.

The study’s lead author, PhD student Rowan Lymbery, said sexual selection is a reproductive advantage that some individuals have over others, but success in fertility doesn’t end at just choosing a sexual partner.

“A person or animal may choose a sexual partner or ‘outcompete’ prospective rivals based on their physical attributes or behaviour,” Lymbery said.

“Something not commonly known is that this also occurs in sperm and eggs, with sperm from rival males competing for fertilisations or eggs choosing the sperm from more compatible males.

“Success in fertilisation therefore doesn’t just end at the selection of a sexual partner but depends on the interactions among sperm and eggs.”

As part of their study, the researchers developed a system which used dye to colour mitochondria sperm in blue mussels. As the dyed sperm competed with undyed sperm from rivals, the researchers observed which eggs the focal male fertilised.

“Moreover, the mitochondrial dye has broader applications in taxa without paternal mitochondrial inheritance; for example, by tracking the dynamics of competing ejaculates prior to fertilisation.”

Lymbery added that the ability to visualise reproductive interactions in detail will also have implications for reproductive biology and medical research in ‘higher order’ animals, such as humans.

“For example, similar cell interactions occur in humans and are crucial for the success of assisted reproduction technologies such as IVF,” he said.

“Determining why some sperm and eggs are more compatible than others could help us better understand infertility and associated genetic disorders, which brings exciting possibilities for improving this technology in the future.”