What can flying insects contribute to neuroscience? 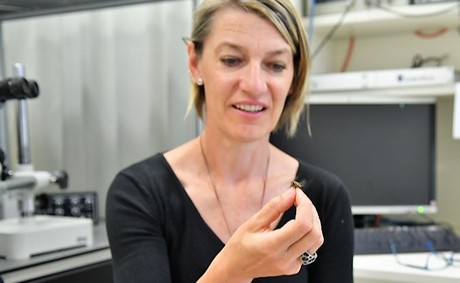 Insect neuroscience specialists are looking to unlock the mystery of how flying insects can rapidly respond to visual and other sensory cues, given that their tiny brains bear no comparison to the super capacity of their flying skills and speed.

Just like in humans, the brains of hoverflies and even tiny predatory robberflies have hundreds of thousands of neurones which give them survival abilities for hunting and pollen collecting, unparalleled even in the most advanced human technologies. And just like humans, the descending nerve (or ‘spinal cord’) in flies narrows down to channel only a few hundred neurones at a time.

So how can these extraordinarily rapid insect responses occur when the body’s pre-motor pathways run into such a bottleneck linking messages from the brain to the wings and body?

Funded by the US Air Force Office of Scientific Research and an Australian Research Council Discovery grant, researchers from Flinders, Cambridge and Minnesota universities are looking for future directions in neuroscience from the study of highly advanced flying insects, such as predatory robberflies and dragonflies, and non-predatory hoverflies and bees.

Their latest study, which analyses the descending nerve in flies, has been published in the Journal of Neuroscience and is expected to lead to more research to mimic the response time in predatory and non-predatory insects in their natural environment in the wild.

“Humans are quite poor at responding to small stimuli in a busy or cluttered field of vision, such as catching a ball while running in a forest,” said Associate Professor Karin Nordström from Flinders University.

“So how can flies see each other in similar environments?

“Clearly, there is something in their evolution that still enables incredibly fast responses in their behaviour when their brain registers a trigger (such as pollen, a potential mate or a yummy meal).”

As well as recording responses in the brain, the researchers are also looking at how the animals’ neurones dictate behaviour and translate into their super sophisticated capabilities. Research findings will help to inform future technologies such as driverless cars and more efficient modes of air travel.

“This latest study is also fascinating because the tiny robberfly and larger (bee-size) hoverfly have very different evolutionary coding but very similar descending nerve cords, so we are now working on understanding the common blueprint for target detection,” Associate Professor Nordström said.

“Indeed, animal brains can be seen as biological computing machines, and many current machine learning tools, including deep neural networks, are heavily inspired by neuroscience using a similar architecture with many layers of non-linear interactions.”