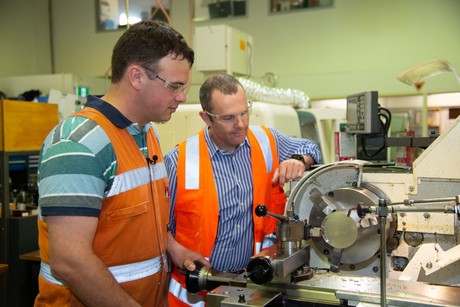 The Australian Antarctic Program is leading an ambitious project to search for the Earth’s longest continuous ice core climate record — more than a million years — from deep inside an Antarctic ice sheet.

Retrieving a million-year ice core is one of the key scientific priorities announced as part of the Australian Antarctic Strategy and 20 Year Action Plan launched in 2016. Ancient atmospheric information obtained from the ice core samples will provide a window into a period in history when a major shift took place in the Earth’s climate system, and when the regular pacing ice ages gradually slowed.

As part of the program, engineers at the Australian Antarctic Division (AAD) have begun work on a high-tech ice drill that will be capable of extracting ice cores from 3000 m beneath the ice. The drill head is currently being machined and assembled at the AAD’s headquarters in Tasmania, with other components soon to follow.

“This component is critically important for the ice drill’s stability, and one of the most important pieces of the whole assembly as the drill makes its descent deep into the ice,” said project lead Tim Lyons.

“The drill will be operating for months at a time at depths of up to 3 km and in temperatures below minus 30°, which means reliability and precision are key.”

“Our aim is to produce a drill that can recover high-quality ice cores day after day, and hopefully reach the bottom of [the] Antarctic ice sheet over a four- to five-year period.”

Lyons admitted that such a drill is “not something you can just buy off the shelf”, but said there is a skilled team of people able to machine and fabricate it at the AAD.

“We also benefit from the fact that the international ice drilling community shares designs and techniques, and we are building on and sharing our experiences with other drilling nations,” he said.

The equipment and accommodation facilities required for the project will be transported from Australia’s Casey research station using five heavy tractors, newly procured by the AAD from Hobart-based supplier William Adams.

With a combined 2600 horsepower, the Caterpillar Challenger Traverse tractors will be capable of towing an entire mobile research station deep inland, with food supplies, accommodation, scientific facilities, power generation and up to 160,000 L of fuel. The first machine has now arrived at William Adams in Hobart, where it will be extensively modified for Antarctica’s extreme conditions.

“The Traverse and mobile inland station enables us to deploy scientists and support teams to some of the most remote and extreme parts of Antarctica, in all weather conditions, and for long periods of time,” said AAD Traverse Manager Matt Filipowski.

“This is a truly exciting capability upgrade for the Australian Antarctic Program, which opens up the Antarctic interior to big, ambitious science projects like the search for a million-year ice core.”

The first expedition is planned to depart Casey research station in early 2021, with a mobile research station to be set up 1200 km inland. Jobs on the Traverse team are expected to be advertised from December this year.