Swinburne University of Technology PhD student Emily Petroff has become the first person to observe a ‘fast radio burst’ - a short, bright flash of radio waves from an unknown source - happening live. The results of the milestone have been published in the Monthly Notices of the Royal Astronomical Society.

Fast radio bursts are “one of the biggest mysteries in the universe”, according to John Mulchaey from Carnegie Observatories in the US. Lasting only a few milliseconds, there is a great deal of scientific interest in the origins of these intriguing phenomena.

In 2007, the first fast radio burst was discovered by astronomers combing the Parkes Radio Telescope data archive for unrelated objects. Since then, five more bursts - apparently from outside our galaxy - have been retroactively observed through the Parkes telescope, as well as a sixth with Puerto Rico’s Arecibo telescope.

“These bursts were generally discovered weeks, months or even more than a decade after they happened,” said Petroff, who was so confident that she’d spot a live burst that she had an international team of astronomers poised to make rapid follow-up observations on other wavelengths - including infrared light, visible light, ultraviolet light and X-ray waves.

After the Parkes telescope saw the burst go off, the team mobilised 12 telescopes located around the world - in Australia, California, the Canary Islands, Chile, Germany, Hawaii, India and even in space.

Daniele Malesani, an astrophysicist from the Niels Bohr Institute at the University of Copenhagen, said the Swift space telescope “saw two X-ray sources”, which were confirmed by the Nordic Optical Telescope on La Palma. However, fellow Niels Bohr Institute astrophysicist Giorgos Leloudas said these two sources were quasars - active black holes - which “just happen to be located in the same direction”.

“No counterparts were seen in the optical, infrared, ultraviolet or X-ray,” stated CSIRO’s Simon Johnston. This eliminates a number of astronomical phenomena, added Malesani, “such as gamma-ray bursts from exploding stars and supernovae, which were otherwise candidates for the burst”. 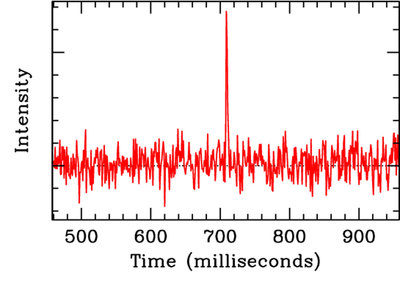 The intensity profile of the fast radio burst, showing how quickly it evolved in time. Before and after the burst, only noise from the sky was detected. Credit: Swinburne Astronomy Productions.

The team did observe that the source of the new burst was up to 5.5 billion light-years from Earth. Petroff explained, “This means it could have given off as much energy in a few milliseconds as the Sun does in a day.”

The Parkes detection system also captured the polarisation of the light, ie, the direction in which electromagnetic waves oscillate (either linearly or circularly polarised). The signal from the radio wave burst was more than 20% circularly polarised and suggests that there is a magnetic field in the vicinity.

“The neat idea that we are seeing a neutron star imploding into a black hole remains a possibility,” said Johnston.

Petroff, for one, is certain that identifying the origin of the fast radio bursts is now only a matter of time.

“We’ve set the trap,” she said. “Now we just have to wait for another burst to fall into it.”

New structural variant of carbon made of pentagons

Researchers from the US and China have discovered a structural variant of carbon called...

Donning and doffing - why protective gear protocols are crucial

The current Ebola crisis has demonstrated that 'inadvertent' contamination is very hard...