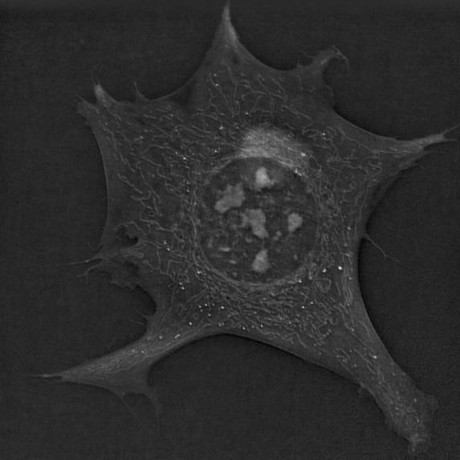 Combining image analysis with a 3D microscopy technique allows researchers to quantify new or little-understood cell biology phenomena, according to a study published in the journal PLOS Biology by Swiss scientists. The technique is likely to help explain little-understood aspects of the behaviour of cell organelles — the functional compartments within a cell.

A wide variety of techniques is available to study living cells, but many of them have intrinsic limitations — such as the need for damaging levels of light, the use of interfering dyes, or poor contrast and resolution.

A relatively new form of microscopy, called holotomographic microscopy, surmounts some of these limitations by splitting a light beam, diverting one part and letting the other pass through the sample. When the two parts are recombined, differences in their waveforms can be used to create an image based on differences in the refractive index of the cell’s components. By tipping the sample, multiple such images can be combined to create a 3D picture of the cell. The whole process is done without dyes and at very low levels of light, preserving the structural and behavioural integrity of the cell during image capture.

The Swiss researchers applied multiple image-processing techniques to extract quantitative data from their holotomographic images. Applying their techniques, they quantified for the first time the flux of fat droplets within a whole cell, measuring their rate of formation and changes in mass over time, and revealing new aspects of their dynamics, including the synchronisation of swelling among a subset of droplets.

The ability of the microscopic technique to capture data from the entire cell simultaneously allowed the authors to provide important new information about the intriguing but little-understood process of organelle spinning. Here, in the run-up to mitosis (the stage of the cell cycle in which the nucleus divides in two), the researchers show that the entire nucleus rotates between 80 and 700° over a period of minutes to hours.

“The ability to not only observe, but to measure dynamics of undisturbed living cells, through the application of quantification techniques to holotomographic microscopy, is likely to lead to discovery of fundamentally new cell behaviours, and new understanding of previously studied phenomena as well,” said Mathieu Frechin from microscopy company Nanolive, who led the research.

A molecule produced in the body when cocaine is ingested, benzoylecgonine, is essential in...