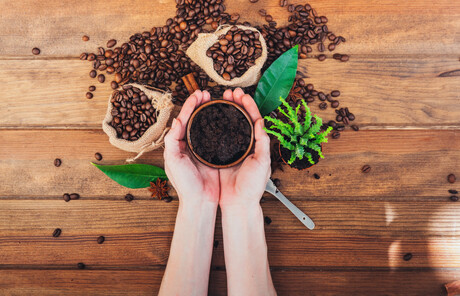 Your morning cuppa may prove to be a sustainable source for an industrial chemical, according to new research from Japanese scientists.

Coffee and tea are some of the most popular beverages around the world, but the grounds and leaves are often discarded as waste despite being rich in a group of compounds called polyphenols. These compounds can be used to produce hydrogen peroxide, and now researchers from the Tokyo University of Science and Nara Women’s University have worked out how to make it using waste from the popular morning brews.

Hydrogen peroxide (H2O2) is used industrially thanks to its requirement in the oxidation process. However, it is currently produced through the anthraquinone process, which is both energy-intensive and produces waste. And while there are other methods which use enzymes or light to produce H2O2, these require catalysts and additional reagents.

The method developed by the Japanese scientists involves adding coffee grounds and tea leaves to a sodium phosphate buffer, and shaking and incubating this solution. The result is hydrogen peroxide without the high energy requirements of the traditional method, making it an attractive and sustainable alternative. The technique has been described in the journal ACS Omega.

The researchers also found that the H2O2 produced with this method could be used in the production of Russig’s blue dye, and in the presence of peroxygenase and styrene could be used to make styrene oxide ― which has several applications in medicine ― and another useful compound, phenylacetaldehyde. The method is thus a fairly simple, cost-effective and environmentally friendly way of producing multiple industrial chemicals.

“Our method can be used to produce hydrogen peroxide from materials that would otherwise have been discarded,” said Associate Professor Toshiki Furuya from the Tokyo University of Science. This could further result in new ways to synthesise industrial chemicals like styrene oxide, opening up new applications for these unused biomass resources.”

The team suggests that further research can be done to optimise the process so that it can produce more H2O2, with more efficiency, in the future.