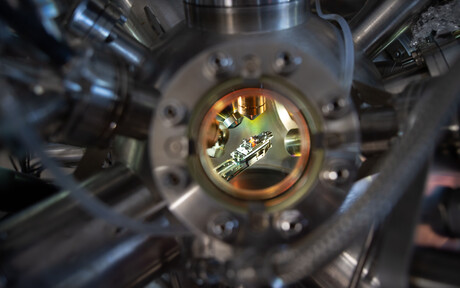 Researchers from the Queensland University of Technology (QUT) have found a way to grow crystal islands that could halve the time and cost of surface science experiments, publishing their results in the Journal of Physical Chemistry C.

Surface science explores physical and chemical reactions of gases and liquids on solids and is important for making semiconductors used in computers, mobile phones and other electronics. It led to the process that produced ammonia for fertiliser used in agriculture and the development of better catalysts for chemical processing, as well as advancing our understanding of batteries.

Associate Professor Josh Lipton-Duffin said that, on average, surface science experiments can take between several hours to many days and can cost between $5000 and $50,000. “Time and cost of experimentation depends on the personnel, type of facility being used, and the cost of the consumables involved,” he said.

Crystal islands can help mitigate this cost, the study authors said, describing their use as “an economical and practical method for facilitating molecular adsorption on two distinct microsubstrates at the same time while under identical experimental conditions”.

“We grew two different types of silver crystal islands on the same silicon surface and were able to simultaneously use them to investigate molecular adsorbates — molecules that we stick to the surface,” said Associate Professor Jennifer MacLeod.

“It does better than cutting experimentation time in half and has the advantage of ensuring that our conditions are identical for two simultaneous experiments, removing uncertainty from interpretation.

“Our study focused on silver because it is so useful for surface science experiments, but it’s likely that we could see a similar result with other metals.”

Dr Vishakya Jayalatharachchi said growing crystal islands on metal surfaces is not new, but the researchers have found a way to increase island size and height, which has many benefits.

“Larger crystal islands grown on silicon have physical and chemical properties identical to the individual single crystals of pure metal,” she said. “So we can study reactions with pure metal without having to use pure metal, making experiments cheaper and faster.”

She added that the bigger islands, while still microscopic, are also visible with more common lower-tech optical microscopes, making them easier to locate and investigate.

“Using surface-confined reactions we can potentially create a whole host of graphene-like materials with additional properties such as electronic gaps, select gas sensitivity, or functional biological sensitivity encoded into the molecular building blocks,” he said.