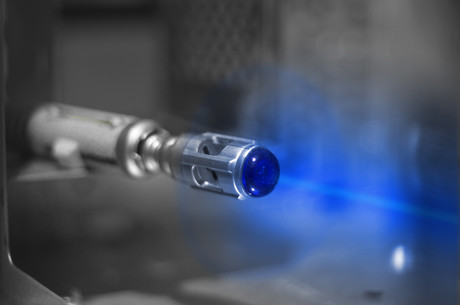 Physicists led by the Australian National University (ANU) have designed a handheld device that uses the power of MRI and mass spectrometry to perform chemical analysis of objects. Their inspiration? The sonic screwdriver used in science-fiction program Doctor Who.

The multipurpose sonic screwdriver wielded by the program’s alien Doctor is used, among other things, to scan and identify matter. Now, Dr Marcus Doherty and his team have proven the concept of a diamond-based quantum device to perform similar functions.

Writing in the journal Nano Letters, the researchers explained that their device seeks to combine nanomechanical sensors and quantum nanosensors: two rapidly developing technologies that have “diverse interdisciplinary applications in biological and chemical analysis and microscopy”. They will achieve this by creating a nanostructure within a piece of diamond, with atomic-scale defects embedded within that nanostructure.

“We got a big diamond, and I got a pneumatic press, and I put a literal tonne of force to measure the mechanical stability of our defects,” said co-researcher Michael Barson. Using this data, along with advanced quantum techniques borrowed from atomic clocks and gravitational wave detectors, the device will be able to measure the mass and chemical composition of molecules.

“For the mass spectrometry, when a molecule attaches to the diamond device, its mass changes, which changes the frequency, and we measure the change in frequency using the defects in the diamond,” said Barson.

“For the MRI, we are looking at how the magnetic fields in the molecule will influence the defects as well.”

The researchers are thus taking the capabilities of both MRI machines and mass spectrometers — two large and powerful instruments — and putting them into a single chip. This removes barriers to access, enabling hospitals, laboratories and more to carry out full chemical analyses on a cheap, portable, mass-producible device.

Giving just one example of the device’s capabilities, Dr Doherty said it could be used by medical researchers to weigh and identify complex molecules such as proteins, which drive diseases such as cancer, and cures for those diseases. “Our invention will help to solve many complex problems in a wide range of areas, including medical, environmental and biosecurity research,” he said.

Sonic screwdriver image courtesy of Matty Ring under CC BY 2.0