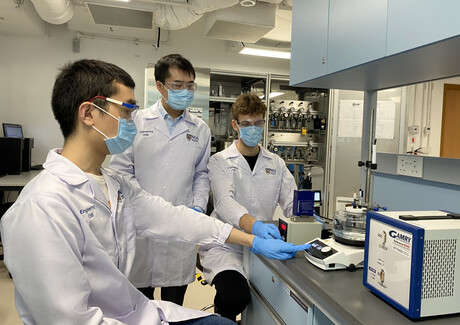 Everything from the production of fertilisers and plastics to liquid fuels and pharmaceuticals requires an important chemical reaction known as hydrogenation — a process involving the addition of hydrogen to unsaturated chemical bonds. Now scientists from the National University of Singapore (NUS) have come up with a method to increase the rate of ethylene hydrogenation by more than five times compared to typical industrial rates, which could lead to higher yields and lower environmental impact.

Unlike most current hydrogenation processes that use a static solid catalyst to speed up the reaction, the NUS technique applies oscillating electric potentials to a commercial hydrogenation catalyst, which then dramatically increased the hydrogenation rate of ethylene to ethane. The new method has been described in JACS Au.

“Such enhancements in the rates or selectivity of chemical reactions are instrumental in making a chemical process more efficient,” said study leader Associate Professor Yan Ning. “Our work demonstrates a more direct and cost-effective way of optimising catalyst performance that is beyond conventional methods.”

Most hydrogenation catalysts have been developed over many centuries, but the development of new catalysts has been typically limited to conventional material design approaches. A few studies have shown that catalysis can be promoted by applying electric potentials to the catalyst. While these methods have already improved the selectivity and activity of heterogeneous catalysts under static conditions, the use of dynamic external stimuli has been underexplored.

The NUS team offers an advanced engineering tool using oscillating electric potentials to promote the rate of chemical reactions without the development of new catalytic materials. To achieve this, the team carried out experiments using a commercial palladium catalyst in a laboratory-scale electrochemical reactor and observed a rate enhancement of five times under optimal dynamic conditions.

They managed to correlate the rate enhancement with the double-layer capacitance — an indicator of the local electric field strength at the catalyst–electrolyte interface — by using different electrolyte solutions. The properties of the catalyst changed periodically and continuously, which sped up the steps involved in the ethylene hydrogenation reaction. Further kinetic experiments suggested that the enhancement could be related to the partial removal of strongly adsorbed hydrogen from the catalyst surface at a negative potential, and the subsequent adsorption and hydrogenation of ethylene at a positive potential.

The team’s findings illustrate the feasibility of using oscillating potentials to improve the catalytic rate of a relatively simple hydrogenation reaction; a similar approach could be extended to control the activity and selectivity of a wide range of catalytic reactions. The researchers are now conducting more studies to improve their understanding of the fundamental principles behind their new technique. They are also looking to further develop their approach into a general strategy for enhancing catalysts beyond their ‘static optimum’.