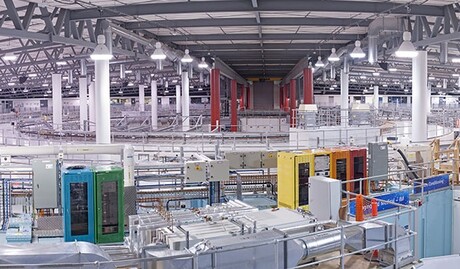 A multidisciplinary team of engineers, technicians and scientists at the Australian Nuclear Science and Technology Organisation (ANSTO) have achieved ‘first light’ on the organisation’s new micro-computed tomography (MCT) beamline, whereby an intensely powerful beam of synchrotron light leaves the main ring and enters the beamline for the first time. This is a major milestone in a plan to enhance the capabilities of the Australian Synchrotron, which already operates 10 beamlines 24 hours a day and services more than 5000 user visits per year.

The ~$10 million MCT beamline is the first part of Project BRIGHT, a $100 million upgrade of the 15-year-old Australian Synchrotron, to deliver eight new science stations at the MCG-sized facility at Clayton, Victoria. The seven-year project is being funded by 30 universities and research organisations from around Australia and New Zealand.

As explained by MCT beamline lead scientist Dr Andrew Stevenson, “The Australian Synchrotron is one of the most impressive scientific research tools on Earth, producing light more than a million times brighter than the Sun.” That light is channelled down pipes known as beamlines to state-of-the-art scientific instrumentation, which then enables cutting-edge research and development.

The new beamline is expected to open a window to the nanoworld, capable of capturing extensive sets of 2D images and then using them to reconstruct the intricate detail of the sample in 3D. This process is non-destructive and can be repeated at different times as the sample responds to, for example, changes in temperature or load.

“We’ll be able to examine something down to one millionth of a metre, without causing any damage to the object we’re looking at,” Dr Stevenson said.

“This is essential when working with sensitive materials such as tissue, specialised devices or priceless ancient artefacts.”

In addition, the MCT beamline can also be used for researching fossils, human bones, microscopic voids in shale and rock for the resources industry, novel components created by 3D printing technologies, and multiple other research processes. Practical applications will include investigating the structural integrity of alloys and how materials respond to temperature — both critical for the nation’s fledgling space program.

“I’m excited to see what other secrets eluding science we’ll be able to discover in the future thanks to this new beamline and the broader $100 million upgrade,” Dr Stevenson said.

The MCT beamline is expected to be available to users in the latter part of 2022.